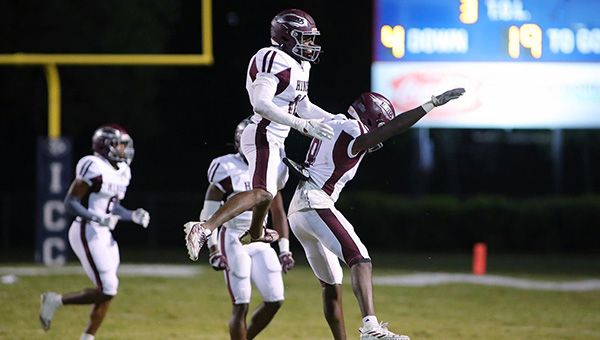 After a season full of starts, stops and nailbiters, Hinds Community College finally got to enjoy a blowout.

It was only the second time this season that Hinds (4-3) has played a game decided by more than two scores.
Pittman carried the ball 18 times for 63 yards, and scored on runs of 1, 2 and 17 yards.

Ranson Oakes was 20-of-31 passing for 218 yards, and threw a 17-yard touchdown pass to Kaleb Mosely in the second quarter. Ben Duncan kicked two field goals.

Ehmad Dabney, Jaylen Knight and Ty’Verius Nichols each had an interception for Hinds’ defense. Itawamba (3-4) only had 187 yards of total offense.

Hinds will return to Raymond on Oct. 20 for its home finale against Mississippi Gulf Coast. Kickoff is at 6:30 p.m.

Putt and Garrett hooked up for touchdown passes of 65 and 55 yards on Northeast’s first two possessions of the game. Putt was 10-of-22 passing for 194 yards, and Garrett caught three passes for 128 yards and the two TDs.

Jones clinched a berth in the MACCC playoffs with the victory. The Bobcats are allowing 13.7 points per game, which tops the MACCC and ranks fifth in the NJCAA. Their 246.6 yards per game allowed also leads the MACCC and is eighth nationally.

Pearl River’s Bryan Whitehead returned a fumble for a 45-yard touchdown, and Milsap had a 10-yard TD run as the Wildcats built a 24-0 lead midway through the third quarter.

Northwest Mississippi finished with 510 yards of total offense, marking the third time in the last four games that it has surpassed 500 yards.

Hefley became the fourth Northwest quarterback to throw for at least six touchdowns in a game. Sheffield’s three touchdown receptions gave him 23 for his career at Northwest, which is a school record.
E. Jai Mason also caught six passes for 81 yards and two TDs for the Rangers. Former Warren Central star Tevin Bell had two tackles on defense.