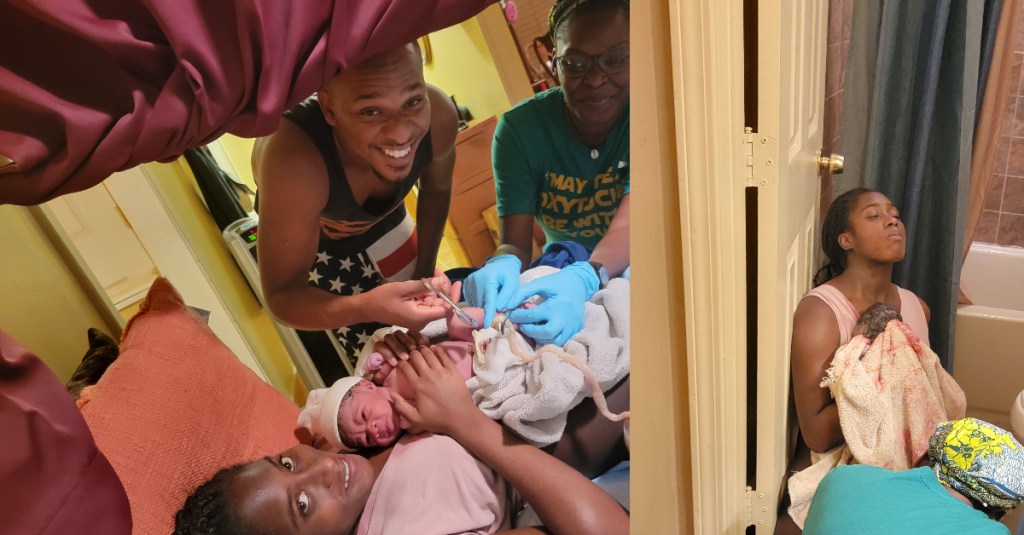 Giving birth at home, for many expectant parents, seems like a worst-case scenario — but in the case of one Vicksburg couple, it was the best way to bring their second child into the world.

For Vicksburg High School and Alcorn graduate Corey Cooper and his wife, C.C., there is little in their lives that’s left to chance, including the birth of their second son, Christopher.

Everything is turned over to God and done intentionally, Corey said.

The couple, who relocated from the New Orleans area back to Corey’s hometown of Vicksburg with their eldest son, Caleb, in 2021, found themselves living in Corey’s childhood home. After a traumatic hospital birth experience with their eldest son, Corey said he and his wife made the prayerful decision to pursue an unmedicated home birth.

“They decided to induce her with our first son, Caleb, and we’d wanted to do a water birth,” Corey said. “We no longer qualified for a water birth (due to potential complications), so we went with a regular hospital birth kind of last-minute. Obviously, there was a fear and the bright lights, a sense of panic. It’s different than when you have a midwife.”

With their second child, the Coopers said they wanted to avoid the negative experiences they’d had in a hospital setting. While everyone’s birth experience is different, Corey said, this is what was best for their family.

Originally, the baby’s due date was one day before the death anniversary of Corey’s mother, the late Dr. Arlen Davis Cooper, on Sept. 6. However, baby Christopher had other plans.

Instead of arriving on his estimated due date, C.C. gave birth on Sept. 12 — the anniversary of Corey’s mother’s funeral service. As the person who delivered her eulogy, Corey said the moment was full circle, a message from God about His promises.

“We don’t understand it all, but the birthing experience had a very redemptive element to it as we were celebrating new life on this particular day,” he said. “It is evident that in even the dark times of life, God and in some way the spirit of our loved ones are present and can bring overwhelming rays of hope and love in the present that often serves as fuel for the future. ”

The Coopers said the home birth was a more calm experience than they’d had in the hospital in New Orleans delivering Caleb. Working with Jackson-based midwife Aisha Ralph of Tawaret Midwifery, they prepared for a water birth in their bedroom, but after more than 24 hours of labor, the baby was delivered in three minutes in their bathroom.

C.C. said she could not have endured the birth without her husband, the birthing team and the prayers that surrounded them all. With that in mind, she said, she felt she could fully surrender and trust her body.

“God was causing me to surrender and fully trust Him,” C.C. said. “I put up sticky note scriptures all over my bathroom mirror so that I would be reminded of God’s truth and power. … Every (time I entered) that room, I was reminded of God, not realizing that this very place, almost set apart for myself by God would be the place where I would unintentionally birth my baby.”

In addition to the “miraculous” birth, the couple said, the other aspect of midwife care they valued is the level of education and understanding they received about each aspect of pregnancy, birth and postpartum.

Having a one-on-one connection with their provider and her team led them to a deeper understanding of the way a mother’s body is designed to carry her baby and bring new life into the world.

They also said they appreciated the opportunity to have a less clinical setting and provide a more comfortable birthing space for C.C. versus a traditional birthing suite in a hospital.

Now that little Christopher is one month old, the Cooper family is settling into life as a family of four, one prayer at a time.