PURRAISE THE LORD: How Salome found herself a home at St. Alban’s 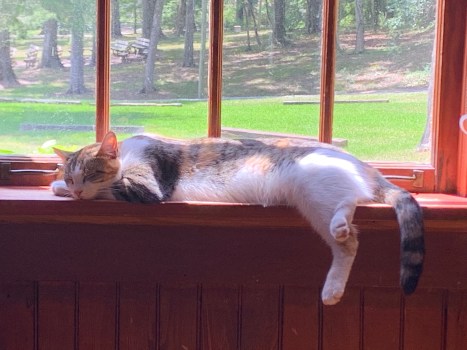 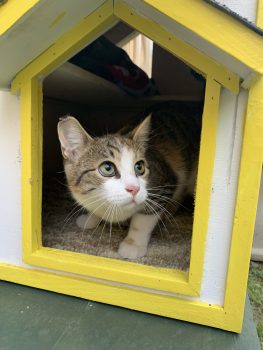 Salome rests in her house, constructed by a parishioner. (Photo Courtesy of St. Alban’s)

One year ago, the congregation of St. Alban’s Episcopal Church in Bovina increased by one — Salome.

Salome is a cat. She arrived at the church one night and just in time to fill a need.

“It started the summer of 2021,” said the Rev. Elisabeth Malphurs, St. Alban’s rector. “It actually started with me setting mouse traps around the church because we were having a little mouse problem that summer of 2021.

It was during a Wednesday evening service that summer that Malphurs told the congregation, “Wouldn’t be great if we had a cat.”

The group walked outside the church and there was this calico kitten the group named Salome; not after the stepdaughter of Herod whose exotic dance led to the death of John the Baptist, but a woman who performed a more sacred duty.

“It was the feast day of Joanna and Salome, the Myrrh-bearing women,” Malphurs said. “The women who anointed Jesus’ body before burial. Because we were celebrating this feast and we found this cute little calico kitten right outside the church, we decided her name should either be Mary, Joanna or Salome. So we named her Salome and decided to see if she’d stick around, and she did.”

Salome, she said, has her own home — a small dwelling built by a parishioner at the onset of winter. During the winter, Malphurs said, a small electric heating pad is placed in the house and plugged in to provide warmth.

And although she stays primarily outside, where she meets and greets visitors, Salome is allowed in the church and fellowship hall under certain conditions.

“The rules are she is not allowed inside on Sunday during church,” Malphurs said. “During the week, however, we’ve gotten a bit more relaxed. The church really does love her. I make sure no one has a cat allergy and so far, we haven’t run into that.”

“She worked on this congregation and won them over,” she said. “I know she did; she had an objective.”

Then there was the time Salome broke the Sunday rule when Malphurs was away.

“She crawled into the lap of the lay service worship leader, and he had to escort her out,” she said.

While Salome isn’t allowed in church on Sunday, she is a regular at St. Alban’s Wednesday night healing service and Bible study.

“She makes herself right at home,” Malphurs said. “She is a people cat; she loves people and people love her.

“I think that I see her almost in the way I see therapy animals. I’ve spent time as a social worker and spent time in nursing homes; you know how an animal can provide a certain kind of comfort and love that’s hard to put words to,” she added. “She does that every Wednesday night. I think she knows part of her job is to be there and provide comfort. It’s wonderful to see how she chooses someone’s lap to sit in and just curl up and provide this experience of just complete love. I see her as an extension of the healing that goes on in that service.”

St. Alban’s, Malphurs said, has long had a ministry of caring for creation and a particular love for pets and animals.

“I think she’s just another reflection of that and she brings us so much joy,” she said.

And the mouse problem is no more.

“This is the amazing thing,” Malphurs said. “I had been catching mice all that summer of 2021. I have not caught a mouse inside the church since then, and I have the traps set. She doesn’t live inside the church but I think her patrolling outside really helps.”