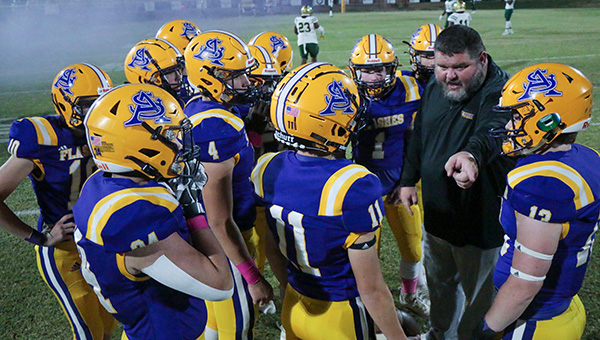 St. Aloysius football head coach Bubba Nettles talks to his team during Friday's home game against Greenville-St. Joe. The Flashes lost, 53-7, for their eighth loss in a row. They'll finish the season next Friday on the road at Tri-County Academy in Flora. (Walter Frazier/For The Vicksburg Post)

There are high school football teams that come into the season expecting to win state championships, and those that hope to. There are some who would be happy to make the playoffs or just finish with more wins than losses.
And then there are teams like the St. Aloysius Flashes.

St. Al has endured enough injuries this season to fill a battle montage in a war movie. Facing a brutal schedule filled with championship contenders, its hopes were brutally crushed before summer even turned to fall.

The Flashes’ one win, in the season opener, was erased from existence by the MAIS when the opponent Park Place Christian canceled its season in early September. We’ll still count it.

St. Al’s playoff hopes ended a month ago. It has one game left, next week against Class 4A championship contender Tri-County.

We’re not here to pile on the Flashes, however. We’re here to celebrate them. No one involved with the program is oblivious to everything that has gone wrong the past two months, yet they’re still showing up to work every day to see it through to the end. They might even be having some fun. They deserve respect for that.

Head coach Bubba Nettles has broken out trick plays and formations to lighten the mood.

While trailing 42-0 to Copiah Academy last week, quarterback Carson Smith stopped just short of the sideline as he headed off the field. No one covered him, and he caught a 56-yard pass to set up a short touchdown run by offensive lineman Jax Oglesby. The Flashes started the game with an onside kick on the opening kickoff, which they recovered.

More than desperation tactics to beat a tough opponent, Nettles said it was a way to inject some fun into a lost season. After all, even if they’re losing the game they haven’t lost the next play yet.

“It’s an opportunity for everybody to get out there and have as much fun as they possibly can,” Nettles said. “One thing I don’t want these kids to do is live in misery. The last thing I would want is for this to become work to them. When you take the fun out of football it’s a rough sport to play.”

Nettles has grasped something that many people involved in youth and high school sports often forget — for 99 percent of the players on the field, it’s both just a game and more than a game at the same time.

St. Al might have a couple of players who get an opportunity to play college football, but most of them will not. Friday night football games are the times they’ll reminisice about with their buddies years from now, rather than the time they signed a college scholarship.

For Nettles, giving his players a chance to make memories and stories they’ll tell in hunting camps 20 or 30 years down the road is as good as giving them a victory at this point.

“Jax Oglesby getting to score that touchdown last Friday night will be a story he’ll get to tell for the rest of his life,” Nettles said. “He could care less if we won 10 ballgames or none. Scoring that touchdown was a big deal. We’re going to do everything we can to make it fun.”

The real problem, then, is not that St. Aloysius has endured a long season. It’s that the season is not long enough. There’s only one game left. One chance to make memories. It’s a fleeting moment in time that is almost gone.

Everyone encounters that moment sooner or later. Few get the chance the Flashes have had during these last couple of weeks of the 2022 football season, to embrace it and soak it in.

“For the seniors, it is to finish out these last two games to the best of their ability. They won’t get them back. It’ll go by in the blink of an eye, just as this season has,” Nettles said. “As much craziness as has gone on, you would think this season is dragging on forever. It’s flown by. To sit here and think that we’re down to five more legit practices before we play our last ballgame, that’s hard to believe.”