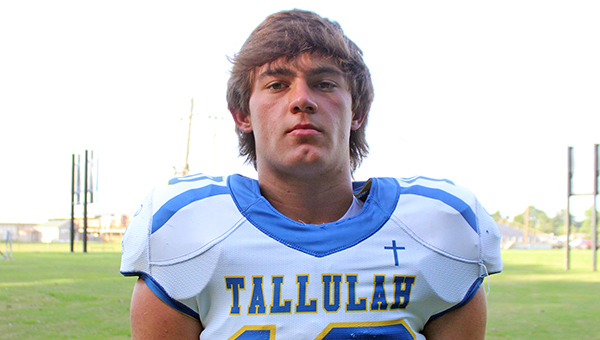 Tallulah Academy quarterback Dee Morgan ran for 179 yards and two touchdowns, and also passed for 115 yards and two TDs, in a 62-22 win over Newton Academy on Friday.

Tallulah Academy tuned up for its district championship opportunity by making a statement.

Morgan scored on runs of 50 and 77 yards, and threw a 39-yard touchdown pass to Henry Ellerbee in the first half. Tallulah scored 30 points in the second quarter and led 46-8 at halftime.

Morgan was 5-of-5 passing for 115 yards, and got his 179 rushing yards on only seven carries. He also ran in three two-point conversions and assisted on nine tackles on defense.

The Trojans had 336 rushing yards and held Newton Academy (8-1) to 139 total yards. Newton trailed 52-8 before scoring two touchdowns in the fourth quarter.

Tallulah Academy (7-1) will host Porter’s Chapel Academy (4-4) on Oct. 21 in the regular-season finale for both teams. The winner will claim the MAIS District 3-2A championship, as well as a top-three seed and a first-round bye in the Class 2A playoffs.

Newton has already clinched the District 2-2A championship and will be either the No. 2 or 3 seed in the playoffs.