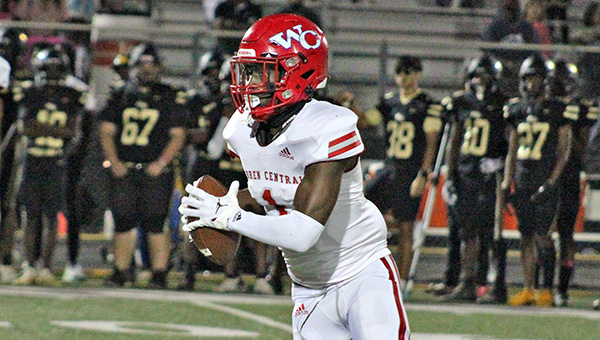 Warren Central's Trey Hall catches a pass out of the backfield against Northwest Rankin before turning it upfield for a 31-yard touchdown. It was one of 10 scoring plays of 30 yards or more for the Vikings this season. (Ernest Bowker/The Vicksburg Post)

1
For nearly 50 years Warren Central’s offensive reputation has been built on running the ball well, and grinding out yards while grinding opponents into dust.

The 2022 Vikings are quite happy to do that, but they’re also blowing up the dust with plenty of explosive plays.

Eight of those touchdowns have covered 40 yards or more, and the total doesn’t include two defensive scores of that length. The Vikings have also had several non-scoring plays of 40 yards or more that set up short scoring plays.
As much as the ability to strike from anywhere on the field, Warren Central head coach Josh Morgan was pleased with the number of players racking up big plays. All of their key skill players have had at least one.

Against Pearl, three different players — Mark Gray, Trey Hall and Zack Evans — either caught a pass or broke off a run of 40 yards or more. Hall had a 48-yard touchdown reception and a 55-yard TD run.

In an earlier win over Oak Grove, Maddox Lynch had receptions of 55 and 63 yards. Eric Collins Jr. had touchdown runs of 50 and 56 yards against Northwest Rankin, and Darius Carter had a 64-yard TD run in the opener against Forest Hill.

“It’s encouraging. We feel like we’ve got playmakers and we’re pushing them to make plays,” Morgan said. “Everybody skill-wise has had some big, explosive plays. The offensive line is playing well together to give them opportunities, and we’re just getting better.”

2
Jackson State stressed safety in its 48-8 rout of Bethune-Cookman on Saturday.

The Tigers recorded three safeties to tie a Football Championship Subdivision record. They became the fourth FCS team to achieve the feat, and the first since Prairie View A&M did it against Arkansas-Pine Bluff in 2011.

The overall NCAA record for most safeties in a game is four, set by Division III Lake Forest against Illinois College in 2021.

Four Football Bowl Subdivision teams have had three, most recently Bowling Green in 2005 against Miami (Ohio).
Fort Valley State is the only Division II team to have done it, in 1993 vs. Miles College.

3
It took until Week 9, but Porter’s Chapel Academy finally did something it hadn’t done all season — kick an extra point.

Senior Daniel Llopis bombed a PAT clean through the uprights following John Wyatt Massey’s 1-yard touchdown run late in Friday’s 36-13 loss to Christian Collegiate Academy. It was the first PAT the Eagles have even attempted this season. They had tried two-point conversions on each of their previous 33 touchdowns before letting Llopis kick after No. 34.

Although Llopis is a very capable kicker with a big leg — he was an All-MAIS Class 2A selection in 2021 — PCA coach Blake Purvis said strategy in 8-man football normally dictates going for two points rather than one.
PCA is 14-for-33 on two-point conversion attempts this season.

“I guess my mindset is you assume that if everybody is perfect on everything and they’re going for two every time and you’re kicking one, then you’re falling behind every score,” Purvis said. “You’re trying to balance what the opponent does, and if the opponent’s not kicking them you want to put yourself in a position to balance what they do. If they go for two, then we want to go for two and win that battle. We want to convert more than they do and we’re on the upper end.”

4
No. 9 Ole Miss didn’t set any rushing records Saturday against Auburn, but it did achieve a bunch of milestones.

Quarterback Jaxson Dart ran for 115 yards, while running backs Quidshon Junkins and Zach Evans had 139 and 136, respectively, in a 48-34 victory. It was the first time since at least 1976 that the Rebels have had three 100-yard rushers in the same game.

The 69 rush attempts for the Rebels were also the most for a team in an SEC vs. SEC game since 2010. The Ole Miss record is 80 attempts, in 1949 vs. Mississippi State.

“You don’t get that every week,” said Dart, who only had 43 yards rushing in six games last season at Southern California. “I think the best thing was just about every play you could feel Auburn wearing down more and more.”
Ole Miss (3-0 SEC) is 7-0 for just the second time since 1962 and first time since 2014. They’ll play at LSU on Oct. 22.