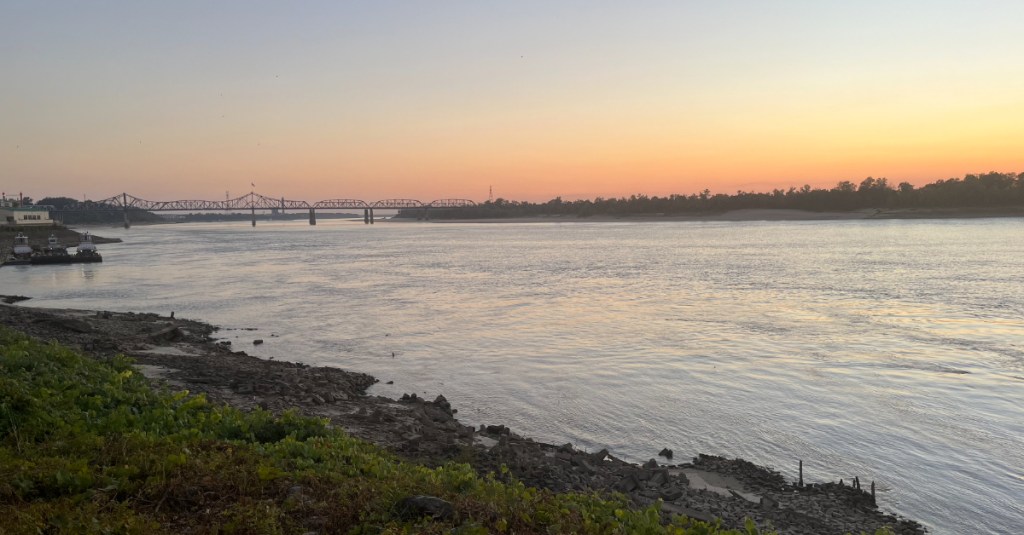 The sun sets over the Mississippi River as the water levels continue to sink in the lower portion of the river. (Photo by Harrison Hadaway)

JACKSON — Plummeting water levels in the lower Mississippi River are projected to drop even further in the weeks ahead, a projection shows, dampening the region’s economic activity and potentially threatening jobs in one of the country’s poorest states.
In Vicksburg, on the Mississippi river’s east bank near the Louisiana line, the water is approaching its lowest level since 2012. The river’s level near that Mississippi city on Thursday was 4.3 feet, and it is projected to drop to 3 feet by Tuesday, according to the National Weather Service.
Falling water levels have disrupted industrial shipping and tourism in the area and are on pace to keep dropping.
“Right now, the latest forecast is going to take us down on Nov. 8 down to 2 feet at Vicksburg and it could drop a lower than that,” Marty Pope, a hydrologist at the National Weather Service Office in Jackson, told the Vicksburg Post.
A dearth of rainfall in recent weeks has left the Mississippi River approaching record-low levels in some areas across several states. Nearly all of the Mississippi River basin, from Minnesota through Louisiana, has seen below-normal rainfall since late August. The low levels have caused barges to get stuck in mud and sand, disrupting river travel for shippers, recreational boaters and passengers on a cruise line.
The lower portion of a Vicksburg bridge, normally submerged in the river, has been exposed to sunlight in recent days. The American Heritage, a paddle-wheeler cruise ship, navigated the river with caution.
Companies that transport industrial products along the river in barges offer a window into the regionwide economic impacts of the low water levels. Companies are loading their barges with less cargo to traverse the river safely.
Pablo Diaz, president of the Vicksburg Chamber of Commerce, said the Port of Vicksburg has already seen a steep decline in tonnage shipped through the port.
“It’s definitely lower, and by a long way,” Diaz said. “It’s a cascade effect. Everybody that is having issues north of here who might be sending products through Vicksburg, that (traffic) has slowed down a lot.”
North of Vicksburg, agricultural products remained stalled in the ports along the river, Diaz said. At least 19 companies rely on the Port of Vicksburg and together they support about 4,000 jobs in the region.
“Things were going really well on the industrial side before the water problem,” Diaz said. “This is going to be a really big problem if it doesn’t turn around soon. Many jobs depend on our industrial users in this region.”
The Mississippi River has seen water levels fluctuate year to year in the past. In 2011, the river flooded and caused $2.8 billion in damage. A drought brought the water levels to dangerous lows in 2012.
The U.S. Army Corps of Engineers has been dredging the Mississippi at several spots to keep river traffic flowing.
__
Michael Goldberg is a corps member for the Associated Press/Report for America Statehouse News Initiative. Report for America is a nonprofit national service program that places journalists in local newsrooms to report on undercovered issues. Follow him on Twitter at twitter.com/mikergoldberg.