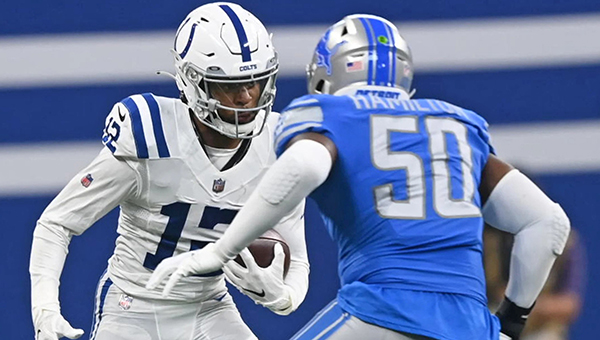 Indianapolis Colts wide receiver DeMichael Harris (12), a Vicksburg native and former St. Aloysius High School star, runs with the football during a 2022 preseason game against the Detroit Lions. Harris, who was released by the Colts at the end of training camp, was re-signed by the team on Tuesday. (Courtesy of the Indianapoilis Colts)

DeMichael Harris is back in the NFL.

The Vicksburg native and former St. Aloysius high school star was signed by the Indianapolis Colts on Tuesday, returning to the team he spent the past two seasons with.

Harris was signed to the Colts’ practice squad. Several injuries to the running back corps, including to starter Jonathan Taylor and top backup Nyheim Hines, sapped the team’s depth.

Harris spent the 2020 and 2021 seasons with the Colts, mostly on their practice squad, after signing with the franchise as an undrafted free agent out of Southern Miss following the 2020 NFL draft.

The wide receiver played in nine games over the two seasons and totaled 10 receptions for 79 yards. He also had six rushing attempts for 46 yards. The Colts released him at the end of this year’s training camp.

Harris’ active roster status for Sunday’s game against the Tennessee Titans is uncertain. Taylor and Hines are both listed on the Colts’ unofficial depth chart, although both were inactive for last week’s win over Jacksonville.

Rookie Deon Jackson started at running back against Jacksonville and caught 10 passes for 79 yards. If neither Taylor nor Hines are available against Tennessee then Harris, who has mostly played a hybrid receiver-running back position in college and the NFL, could get a promotion and play a similar role as a versatile receiving back. He could also add depth to the roster by playing on special teams.