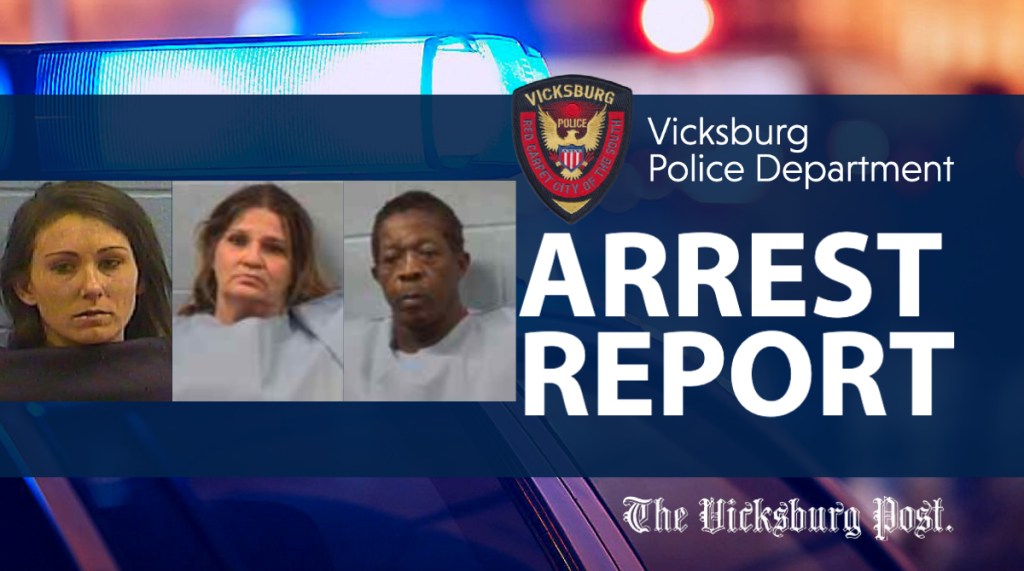 The Vicksburg Police Department made several arrests between Monday and Friday for forging a check, possession of methamphetamine and possession of a firearm by a convicted felon. Multiple reports of theft were also taken by the department.

Woman arrested for forgery
Racheal Vinzant, 33 of Vicksburg, was arrested Friday on a charge of uttering a forgery after she cashed a check she had written from a closed account at a local grocery store.

Vinzant appeared in Vicksburg Municipal Court that same day where Judge Penny Lawson set her bond at $15,000 and bound her over to the Warren County Grand Jury.

Smith appeared before Judge Penny Lawson in Vicksburg Municipal Court on Monday where she was bound over to the Warren County Grand Jury on a $25,000 bond.

Felon arrested for meth and possession of firearm
Sammie Parham, 56 of Vicksburg, was arrested Monday after his vehicle was stopped for traffic violations.

His bond was set at $50,000 by Judge Penny Lawson and he was bound over to the Warren County Grand Jury.

Shots fired into occupied vehicle
Officers took a report at the police station on Saturday at 1:50 a.m. regarding an incident in which shots were fired into a vehicle in the area of First East and Walnut streets.

The complainant stated a male subject, with whom she had an earlier argument, fired several times at her vehicle but missed. However, the windshield of a 2006 Pontiac Grand Am parked nearby had been struck once.

Tires and rims stolen from Mercedes CLS
Officers responded to an address in the 2600 block of Washington Street in reference to a theft on Saturday at 12:56 p.m.

The victim reported two tires and rims were missing from a 2007 Mercedes CLS. The reported value of the rims and tires is $2,000.

The victim stated someone removed an Apple iPad from her suitcase. The reported value of the iPad is $1,000. The case is currently under investigation.

Handgun stolen from home
Officers were dispatched to an address in the 1400 block of Maxwell Street in reference to a residential burglary on Sunday at 4:35 p.m.

The victim reported that an unknown person entered the home and took a Taurus 9mm handgun. The case is currently under investigation.

Laptop, hot spot, and monitor stolen from pickup
Officers responded to a report of an auto burglary in the 5900 block of Highway 61 South on Monday at 6:03 a.m.

The total estimated value of the items is $3,900. The case is currently under investigation.

Revolver stolen from pickup
Officers were dispatched to an address in the 5900 block of U.S. 61 South for an auto burglary on Monday at 11:34 a.m.

According to the victim, someone entered a 2013 Ford F-450 pickup truck and stole a .410-gauge revolver. The victim believes the vehicle was locked. The case is currently under investigation.