Flashes finish difficult season with a road trip to Tri-County 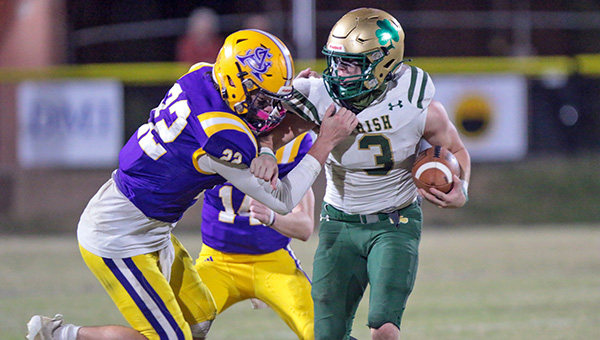 When St. Aloysius’ football team plays its regular-season finale, it won’t be with a lot of the same emotional or tangible stakes as normal.

With a 1-8 record, the Flashes will not qualify for the MAIS Class 4A playoffs. And playing an opponent with an 8-1 record, even their prospects for going out a winner seem slim.

Because of injuries, a number of the team’s seniors played their last games weeks ago. Their young replacements are preparing for 2023 and beyond.

So when the Flashes arrive for Friday’s road game at Tri-County, it will be for one last hurrah as teammates and football players, to start working toward a brighter future, and the satisfaction of finishing a long and difficult journey.

“It’s been tough because we’ve had a lot of injuries, but we put a lot into it and kept showing up to practice and giving it everything we have. It’s built a really good brotherhood and relationship between us,” said Jake Brister, a senior wide receiver and punter. “We’ve been playing for so many years together and we didn’t see it ending like this. But we kept showing up no matter what happened. The people who were injured still showed up to practice. We’re giving it everything we have.”

St. Al’s lone win this season came in its opener against Park Place. It has lost all eight games since then, and seemingly a starter along with every one of them.

Ten Week 1 starters missed at least one game with an injury. The list includes senior linemen Matthew Pitre, Mason Watts and David Wallace. Injuries submarined the season literally from the start senior running back Padre Gray sprained his ankle on the first series of the opener.

“We lost 8-0 to Centreville in a swamp, and none of us saw what was coming the next game,” St. Al coach Bubba Nettles said. “That week I lost a kid for the remainder of the year to a non-football related injury. Then I lost my center to a football-related injury in the game. The next week I lost my left tackle. Then I had some illnesses, some shoulder injries, and it began to snowball.”

The one silver lining in the wave of injuries to upper classmen was the opportunities it created for their younger teammates.

Those are all players who are expected to be cornerstones for the 2023, 2024 and 2025 seasons, and Nettles said giving them game experience now will pay off later.

“Them next year, knowing what to expect now, they’ve played the top opponents so anything we schedule along the way they’ve already faced it,” Nettles said. “They’re going to be a very integral part of our success next year on both sides of the football. You can’t pay for that kind of experience.”

It’s been a learning experience for the rest of the Flashes as well. Losing certainly hasn’t been fun, but learning how to adapt and handle adversity has taught life lessons that can’t be replaced.

“It’s taught me to never expect things to go as smoothly as you want them. It’s also taught me about patience, love, compassion, understanding, admiration for these kids,” he continued. “These kids have taught me to be courageous and brave. I’ve learned a lot from them.”