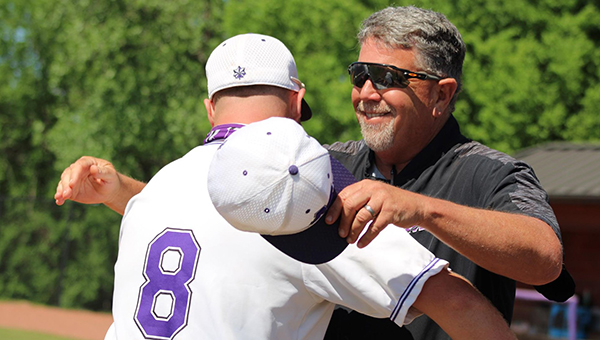 Longtime Millsaps College baseball coach Jim Page, right, is one of eight members of the Mississippi Sports Hall of Fame's Class of 2023 that was announced Wednesday. (Millsaps College Athletics)

JACKSON — The Mississippi Sports Hall of Fame’s Class of 2023 will induct its usual collection of football, basketball and baseball greats, while also welcoming a new sport into the fold.

Tony Rosetti will become the first shooting sports athlete inducted into the Hall as part of the eight-person Class of 2023 announced Wednesday.

Rosetti, a Biloxi native, was a member of the 1972 U.S. Olympic team as a skeet shooter. He also won gold medals at the 1970 Pan-American Games and was the National Intercollegiate Skeet Champion while competing at Ole Miss.

Page has been Millsaps’ baseball coach for 34 years, following an outstanding playing career at the same school. He holds the school record for the highest batting average with a .487 mark.

Page has won 815 games, nine conference championships, been in eight NCAA regionals and reached the Division III World Series once. He was the Southern Athletic Association Coach of the Year in 2022.

“It leaves you speechless,” Page said in a statement. “I think of how blessed I have been to graduate from Millsaps College and then get offered the job to coach at my alma mater … I fell in love with this place in 1981 as a player and it is so much more than baseball. The school, the professors; I didn’t think anyone could be so nice.”

Maholm ranks fourth in Mississippi State history in strikeouts and innings pitched, and is a member of the school’s baseball Ring of Honor. Maholm was a first-round draft pick by the Pittsburgh Pirates in 2003 and played 10 seasons in the major leagues.

Herrod played at Ole Miss before being drafted by the Indianapolis Colts in 1988. He played linebacker for 11 seasons with the Colts and is the franchise’s all-time leader in tackles.

Surtain was a four-year letterman as a defensive back at Southern Miss and the Conference USA Defensive Player of the Year in 1997. He was a second-round draft pick by the Miami Dolphins in 1998 and made three Pro Bowls during an 11-year NFL career with the Dolphins and Kansas City Chiefs. He had 37 career interceptions.

Ross helped the Ole Miss women’s basketball team to two AIAW Regional tournaments as a player. She was chosen to the first ever Southeastern Conference All-Tournament team in 1980 and holds the Ole Miss record of 333 career steals. Later, she was a two-time SEC Coach of the Year during 12 seasons as the University of Florida’s head coach.

Ross also won the WNBA’s Coach of the Year award in 2012 with the Los Angeles Sparks.

The Class of 2023 will be formally enshrined next summer during the Mississippi Sports Hall of Fame Induction Weekend July 28-29.