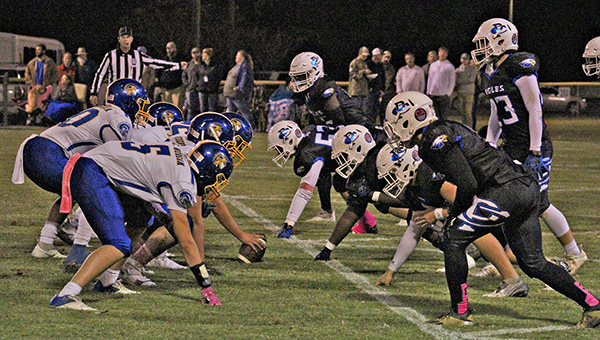 Tallulah Academy and Porter's Chapel Academy football players line up for a play on the goal line during their MAIS Class 2A playoff game in 2021. The teams will meet Friday in Tallulah in the 2022 regular-season finale, with the District 3-2A championship on the line. (File/The Vicksburg Post)

Porter’s Chapel Academy and Tallulah Academy will both participate in the MAIS Class 2A playoffs.

Everything else — where they’ll go, who they’ll face, their path through the bracket and more — is what’s at stake in their winner-take-all showdown Friday night.

PCA and Tallulah will square off for the MAIS District 3-2A championship. The winner also gets a first-round bye in the playoffs, perhaps a more favorable draw in the bracket, and bragging rights in a growing rivalry.

“It’s huge,” PCA coach Blake Purvis said. “It’s about as big of a difference as you can get. If we have to go to Ben’s Ford, that’s probably one of the longest road trips you can take. Not to mention if you win you stay away from the bottom half of the bracket and if you lose you’re playing the No. 1 seed.”

Tallulah Academy (7-1, 1-0 District 3-2A) has won four games in a row and its playoff scenario is clear. If it beats PCA, it will be the No. 3 seed and get a first-round bye. If it loses, it will likely be the No. 6 seed, play next week, and then have a potential rematch with Porter’s Chapel in round two.

Whoever the opponent is does not seem to matter to the Trojans at the moment. All seven of their wins have been by at least 18 points, and many were not even as close as the final score indicated.

They led previously-unbeaten Newton Academy by 44 points in the fourth quarter last week before giving up two late touchdowns with the backups and settling for a 52-22 win.

“I don’t think we could have played a better game than we played last Friday,” Wood said. “I don’t know how you hold Newton to eight points. I never dreamed we could hold them to that. We were executing everything. When you have this many seniors, that’s what’s supposed to happen.”

Purvis felt the Eagles played better than the final score indicated in last week’s 36-13 loss to Christian Collegiate Academy, and that a couple of injuries contributed to the recent slide. Still, he added, they need to refocus if they want to win the school’s first district championship since 2008.

“We should be back to a full roster and healthy for the first time since Prairie View. Hopefully that’s part of it,” Purvis said. “We’ve just got to do what we’ve been trying to do all year, and that’s focus on ourselves and what we can control.”

Unlike Tallulah Academy, whose playoff path seems set, PCA’s situation is much more volatile. It will be the No. 3 seed and earn a bye if it wins Friday. If it loses, the MAIS power points system could shuffle it as far down as the No. 9 seed.

The Nos. 5-8 seeds host first-round games, so if the Eagles are ninth they will go on the road to Bogalusa, La., next week to play Ben’s Ford. PCA beat Ben’s Ford in the regular season, but a four-hour road trip followed by a potential second-round matchup with No. 1 seed Tunica Academy is not a scenario anyone wants.

“You get in and you’ve got a chance. Wherever the cards shuffle out, the goal is to win it all. If that’s the plan you’re going to have to beat the best anyway,” Purvis said. “That’s the joy of playing the game.”