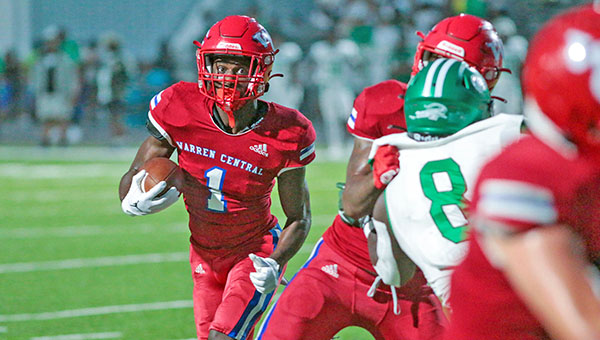 By the time Week 9 of the high school football season is put to bed, Warren Central could have a playoff berth secured. It’ll only take a win over Terry and some other favorable results in Region 3-6A.

None of that interests coach Josh Morgan right now, though. His focus is just on keeping his Vikings rolling.

“I don’t know. I really don’t know,” Morgan said of the playoff possibilities. “There’s a bunch of different scenarios. Just focus on winning.”

Warren Central (6-1, 3-1 MHSAA Region 3-6A) has been doing that in every way possible. They’ve won defensive slugfests and offensive shootouts, rallied late and gotten in front early.

After seven games and eight weeks they’re in second place in Region 3-6A. It’ll be difficult to overtake first-place Brandon (7-0, 4-0) with only three regular-season games left, but the Vikings have the inside track to a second-place finish and a home playoff game in round one.

The next challenge is keeping that up against Terry (4-4, 1-3), which has slumped after a 3-0 start. The Bulldogs have lost four of their last five during a tough stretch that included the four Region 3-6A frontrunners and Class 5A power Poplarville.

As usual, however, Morgan is not taking them lightly.

He noted that Terry already has its highest win total since 2018 and has talented players at the right positions to make them a difficult matchup.

“They’re going to be bigger than us, faster than us, and they’ve definitely been a team that’s trending up. It’s one of those games where we’re going to have to be at our best,” Morgan said.

Warren Central has been trending up on the offensive side of the ball during the Region 3-6A schedule. They’ve scored 11 offensive touchdowns in their three region victories and have 10 touchdowns this season of 30 yards or more.

The Vikings have also committed just three turnovers this season and have not lost a fumble. Their turnover margin is plus-14.

“We’re making explosive plays, but we’re pairing that with taking care of the football. We’re not turning the ball over,” Morgan said.

The Vikings are getting contributions from all of their skill players.

Quarterback Jack Wright had his best game of the season in last week’s 38-21 win over Pearl by completing 12 of 20 passes for 203 yards and one touchdown. Six running backs and receivers each have had at least one run or reception of 35 yards or longer this season.

“The last two weeks, our offense has looked really well. It’s several different guys contributing, and that makes you really hard to defend. It’s good to see. We need that and to continue to do that,” Morgan said.

Morgan said his coaching staff, led by offensive coordinator Rob Morgan, has done a good job getting the offense to click. Warren Central has scored 214 points, putting it on pace for the program’s highest season total since the 2017 team scored 377. The Vikings scored 275 points in 2021.

“We got better every week. We’ve been plugging and playing a bunch of O-linemen and I think we found what works for us,” Josh Morgan said. “Coach Rob (Morgan) is getting a better grasp of his personnel. There’s some things we can’t do, so there’s no sense trying to do them and beating your head against the wall. It’s find what we’re good at, and that comes with time.”