‘For us, it’s -1’: Watco prepares for lower river levels at the Port of Vicksburg 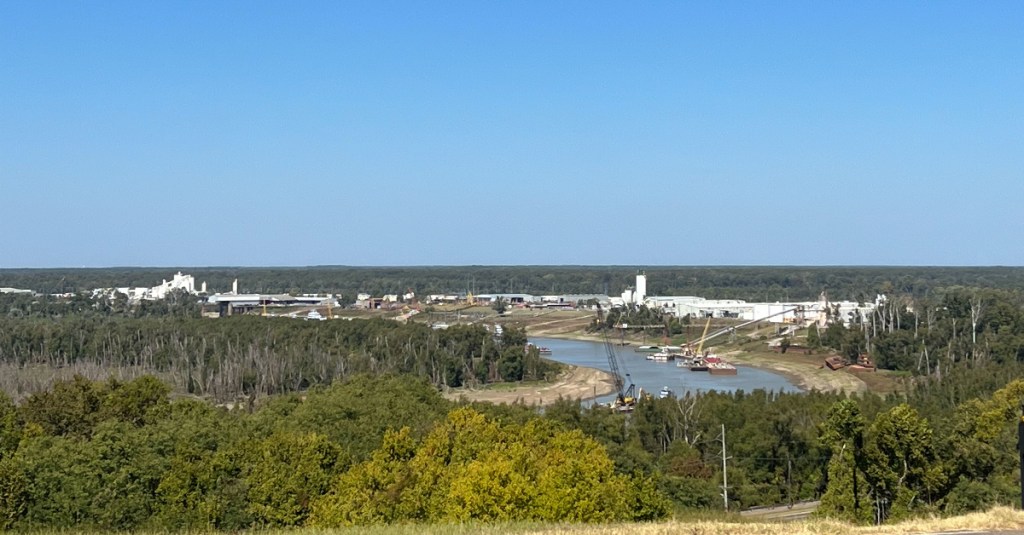 The Mississippi River and the Port of Vicksburg as visible from Fort Hill on Friday. (Photo by Anna Guizerix | The Vicksburg Post)

The Mississippi River is at near-record low levels, and Vicksburg’s maritime industry is feeling the squeeze.

As of 1 p.m. Friday, the river level was 0.17 feet at Vicksburg. During Tuesday’s meeting of the Warren County Port Commission, Watco Terminal Manager Kevin Neihaus shared an update on how his company’s operations at the Port of Vicksburg on Haining Road are faring as the water continues to dissipate.

“It’s definitely affected us,” Neihaus said. “We’ve had to add some barges up against the dock to be able to get the barges we’re loading in deeper water. Therefore, it’ll draft and won’t hit the bottom.”

In addition to logistical changes brought on by the low water, Neihaus said another issue Watco’s customers are battling is barge availability. He explained that many customers are unable to get barges down to New Orleans to get them unloaded and back up to Vicksburg.

“I know a lot of the grain industry is having difficulty getting barges to load because of the water,” Neihaus said on Thursday. “Most of their docks were built to accommodate zero feet on the Vicksburg gauge. By the weekend, it’s going to be close to zero.”

“The typical barge has a draft of anywhere from 9-foot-6 to 10-foot-6, depending on the barge size. We’re restricted right now to an 8″6′ draft, so we have to put less product in the barges,” he said.

Pablo Diaz, president and CEO of the Vicksburg Warren Partnership, said during Tuesday’s Port Commission meeting that things could be much worse in Vicksburg, but thanks to the ingenuity of Watco and other operators at the port, business hasn’t come to a crawl just yet.

“It’s a whole lot more work, but we’re blessed, in a way,” Diaz said. “I’ve been in conference calls with Greenville and Rosedale and other places, and they’re sunk. They can’t get anything.”

For ports that depend on tonnage for revenue, the lack of water has severe financial implications. Neihaus explained that the types of products transported also have an impact on whether or not barges are able to travel up and down the river at this time.

For example, he said, one of the only area ports that are able to accept soybeans, which recently finished harvest, is in Vidalia, La.

The Mississippi River is a strange beast, Neihaus explained, with levels varying greatly even at points almost directly across from one another.

“Memphis is at the lowest state it’s ever been, at -10. Our terminal up there has not been able to load barges or unload barges at their dock, but across the river in West Memphis, our terminal there is on the outside of a curve, and they’re operating just fine,” Neihaus said. “Their business has picked up because they are able to load barges.”

If companies are unable to transport their products on the river, they are forced to either transport them in trucks or simply wait — grains, for example, can sit in silos until the river is higher.

The river is projected to come dangerously close to the -1 mark over the next two weeks. If that happens, Neihaus said, it could spell trouble for Watco.

“If we can’t unload and load barges, then we don’t have revenue. Then our guys will have to issue a Force Majeure letter to our customers because we won’t be able to operate,” he said. “It would have to get down to -1 (for operations to cease). That only affects the harbor at the Port of Vicksburg for me. For other operators on the harbor, it could be a different number.