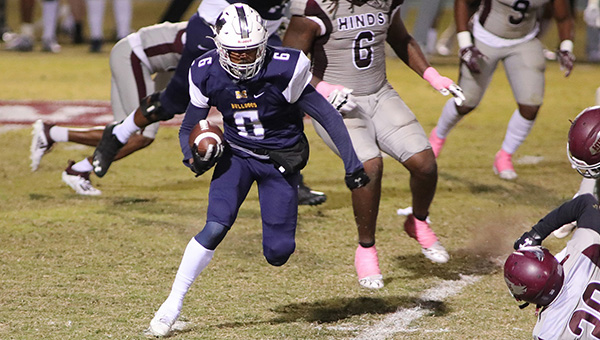 RAYMOND — Mississippi Gulf Coast started this season a little slow, but it’s coming on strong when it counts.

Pat McQuaide passed for 347 yards and a touchdown, and ran for another score as Gulf Coast hammered Hinds Community College 34-7 on Thursday in a pivotal game in the Mississippi Association of Community Colleges Conference South Division.

Gulf Coast (5-3, 4-1 MACCC South) won its third game in a row after a 2-3 start. It clinched a berth in the MACCC playofs, and set up a showdown with undefeated Jones College next Thursday in Perkinston for the South Division championship.

“We come in every Sunday with a fresh slate,” Gulf Coast coach Jack Wright said. “We’ve got to look at Jones. I’ve been here five years, and every year we played Jones it’s been a big matchup in the South. It’s no different this year. It’s one you circle on the schedule because you know it’s going to be a great game.”

Hinds (4-4, 3-2) will finish its season on the road, Oct. 27 at Copiah-Lincoln. The Eagles had a two-game winning streak snapped with their worst loss of the season.

After a scoreless first quarter, Gulf Coast took control by scoring 21 points in the second.

Hinds fumbled at Gulf Coast’s 1-yard line early in the second quarter, and the Bulldogs then embarked on a 10-play, 98-yard scoring drive capped by Xavier Evans’ 1-yard run. McQuaide and Cam Thomas also had short touchdown runs before halftime to put Gulf Coast ahead 21-7.

Gabe Showalter kicked two field goals in the second half and McQuaide threw a 21-yard touchdown pass to Cyrus Hartfield to complete the blowout.

Hinds’ only touchdown came on Jeffrey Pittman’s 1-yard run with 1:59 left in the second quarter. Pittman ran for 51 yards on 15 carries, but the Eagles finished with 157 yards of total offense. Quarterback Ranson Oakes completed 15 of 22 passes for only 95 yards.

“It was a lot of defensive stops,” Wright said. “That’s what stands out in my mind. It seems like they were always punting after third-and-medium, third-and-long. They converted some, to be fair, but they didn’t convert any critical downs. Our defense just played really, really well tonight.”

Henry scored on runs of 7 and 1 yards in the first half to stake the Bobcats to a 24-0 lead at halftime, and they cruised from there.

Mississippi Delta got a 38-yard field goal by Davon Klein in the third quarter, but did not reach the end zone until quarterback Donovan Cole scored on a 4-yard run with 1:20 left in the game.
Mississippi Delta has only scored more than 10 points in one of its eight games.

Co-Lin finished with 250 rushing yards as a team and snapped a two-game losing streak.

Several Warren Central alumni had highlights for East Central in the loss. Kicker Brandon Gilliam booted two field goals, from 28 and 38 yards. Jaylin Thompson returned a blocked PAT for a defensive two-point conversion, and his brother T.J. Thompson had a team-high eight tackles.

Marquis Willis threw two touchdown passes for Coahoma, including a 35-yarder to Brandon Harris with 1:41 left in the game. Willis’ two-point conversion run pulled the homestanding Tigers to within 17-14, but Northeast Mississippi recovered the ensuing onside kick.

Coahoma got the ball back with 4 seconds left and Willis’ fourth interception of the game, on a desperation heave, ended it.

Former Warren Central star Taylen Smith had four tackles, two tackles for loss, one sack and one interception for Coahoma.

The Rangers outgained Holmes 288 yards to 6 on the ground, and registered five sacks. Defensive back Tevin Bell, a former Warren Central star, had two tackles.