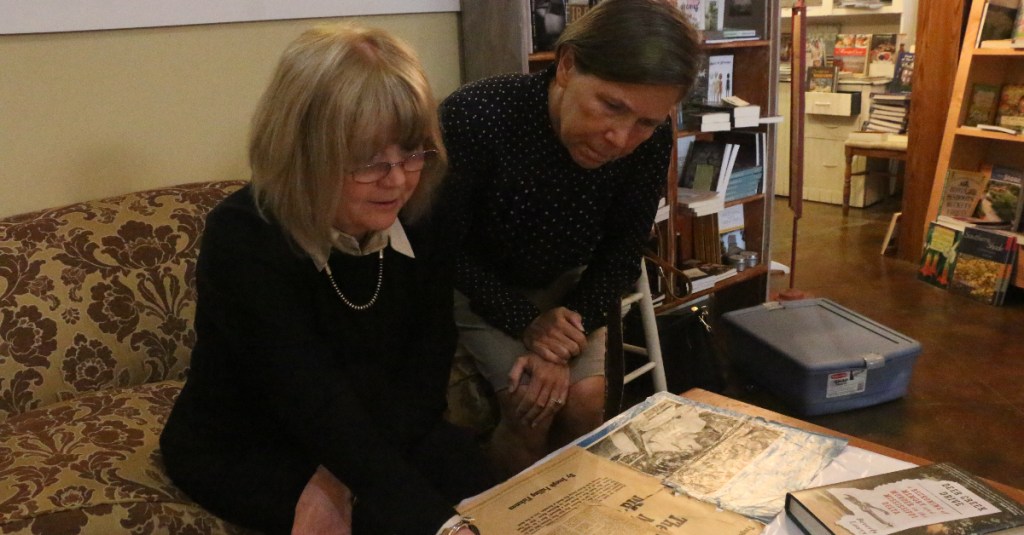 Vicksburg resident Penny Varner, left, points to a picture of her father Stanny Sanders with Lorelei Books owner Kelle Barfield looking on. Varner's father, Stanny Sanders, is featured in Beverly Lowry's book, "Deer Creek Drive," which is a true story of a salacious murder that took place in Leland in 1948. At 3 p.m. Oct 31 at 1103 Washington St.Lowry will be on hand for a book-signing event. Varner will also be in attendance. (Photo by Terri Cowart Frazier | The Vicksburg Post)

Beginning at 3 p.m. on Oct. 31, Beverly Lowry, author of “Deer Creek Drive,” will have a book signing at Lorelei Books, 1103 Washington St., with free refreshments offered.

The nonfiction work by Lowry recounts the brutal Leland murder in 1948 of Idella Thompson by her daughter Ruth Dickins. Dickins was the only person in the house at the time of the murder, but she claimed she saw a Black man fleeing from the scene.

No evidence was found to substantiate Dickins’ claim; therefore, she was convicted and sentenced to life in prison.

With the Jim Crow South still front-and-center in the small town, and after petitions pleading for her release, Dickins was set free after only serving just six years of her life sentence.

Lowry was only 10 at the time of the murder, but this story and its aftermath have played a part in her own upbringing in Mississippi. In addition to Lowry being on hand for the signing, Vicksburg resident Penny Varner will also be at Lorelei.

Varner’s father, Stanny Sanders, was the young District Attorney who prosecuted the case in Greenville.

“Beverly Lowry captured an amazing, true Delta story from 1948 and will travel to Texas to wow us with the background of this sensational murder,” Lorelei Books owner Kelle Barfield said. “An especially interesting twist is the connection of Penny Varner’s father to the events almost 75 years ago. Having a Vicksburg link makes Beverly’s unfolding of the details all the more compelling for us.”

Although only 2 years old at the time of the trial, Varner said, during her childhood she had “overheard” talk about the “gruesome” murder.

Thompson had been stabbed 150 times and left face down in a bathroom of her home.

“The ‘Dickins Trial’ was famous,” Varner said. “My mother clipped every newspaper article and murder magazine about the trial and the memorabilia ended up with me — the only surviving member of the Sanders family.”

Varner was unaware of Lowry’s book about the murder, she said, until Mack, her husband, saw it in the Clarion Ledger.

“We actually found out about it from reading the newspaper. Mack was looking at the book section and said, ‘You’re not going to believe this,’” Varner said.

Since the couple was set to go out of town to visit their grandson at college in Athens, Ga., Varner said they ordered a copy of the book.

After it arrived Varner said, “I opened it up and my daddy’s name was on the first page.”

Varner, who had not known Lowry, said not only had the book about her dad’s trial 70 years ago been a shock, “But seeing his name in print, alive on paper, page after page, was an emotional experience I cannot describe.”

After calling a friend who called a friend, Varner said, she was able to connect with Lowry.

“I invited her to come to see me and am so thrilled it has worked out, and I want to thank Beverly Lowry for the vivid portrait she painted of my father who passed away 50 years ago. It is a rare and tender gift,” Varner said.