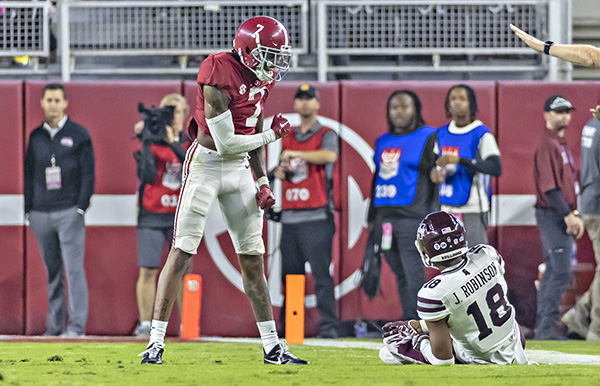 TUSCALOOSA, Ala. (AP) — Alabama’s defense came one play from a shutout a week after losing in a shootout.

It wasn’t quite good enough for the sixth-ranked Crimson Tide’s defense.

Bryce Young passed for 249 yards and two touchdowns and Alabama’s defense continued its domination of No. 24 Mississippi State in a 30-6 victory Saturday night — despite the last-play touchdown.

Tide linebacker Henry To’oTo’o and his teammates weren’t happy about it.

“We’ve just got to finish,” To’oTo’o said. “We wanted to shut them out with a zero. We weren’t super mad, but kind of disappointed with ourselves.”

The Tide (7-1, 4-1 Southeastern Conference) rebounded from their first loss of the season, a 52-49 defeat to No. 3 Tennessee. Alabama defenders got a measure of redemption after giving up more points than any Alabama team since 1907.

The Tide appears back on track after the loss, especially the defense.

“It wasn’t always perfect execution. But to me, that’s a start,” Tide coach Nick Saban. “It’s kind of time to answer the bell and now the challenge is we need to build on that.”

The normally prolific Will Rogers and the Bulldogs (5-3, 3-3) still couldn’t reach the end zone against Alabama until the final play. It was the first touchdown Mississippi State had managed against the Tide in three meetings under coach Mike Leach. They’ve been outscored 120-15 in that span. In 14 games against Nick Saban-coached Alabama teams since 20017, the Bulldogs have only scored more than 10 points twice.

Rogers completed 30 of 60 passes for 231 yards. Jo’quavious Marks scored on a 1-yard run to end the game. Young completed 21 of 35 passes with a couple of long ones on scrambles, including a 31-yard TD to JoJo Earle.

“I didn’t think we played well at all,” Leach said. “I’ll tell you one thing that they do that gives us trouble: We’ve got some guys that are afraid of the jersey that says Alabama on it. We spend a lot of time frightened of their jerseys. You want to scare some of the guys on our team, put an Alabama jersey on. It’ll scare the hell out of them.”

This one didn’t turn into a showdown of star quarterbacks, however, but a statement game for ‘Bama’s defense. The Tide, which started LSU transfer cornerback Eli Ricks for the first time, had 15 pass breakups and four sacks after getting victimized by the Volunteers.

Ricks, who didn’t play against Tennessee, and fellow cornerback Kool-Aid McKinstry each broke up four passes.

Alabama has won the last four meetings at Bryant-Denny Stadium by a combined 136-9. Mississippi State’s touchdown was its first in Tuscaloosa since 2014.