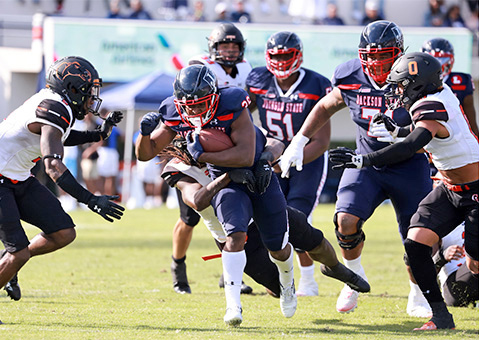 Jackson State running back Sy'veon Wilkerson runs with the football Saturday against Campbell. Wilkerson finished with 116 rushing yards and one touchdown as the Tigers won 22-14. (Jackson State University Athletics)

Texas Southern scored on an interception return and a punt return, and ripped off 20 straight points in the second half to beat Alcorn 34-27 on Saturday.

Alcorn (3-4, 2-2 Southwestern Athletic Conference) lost its second game in a row. Three of its four losses this season have been by a total of 15 points.

The Braves led 20-14 in this one, after Jarveon Howard scored on a 34-yard run early in the third quarter. In the first half, Aaron Allen threw touchdown passes of 65 yards to Monterio Hunt and 62 yards to Juan Anthony.

Allen also had an interception returned 48 yards for a touchdown by Texas Southern’s Raheme Fuller in the second quarter, was picked off two other times, and sacked four times. Allen was 27-of-41 passing for 379 yards and three touchdowns.

Howard had 135 yards and a TD on 23 carries. Anthony caught eight passes for 121 yards.

The Tigers took the lead for good in the third quarter, when Chaunzavia Lewis returned a punt 73 yards for a TD and a 24-20 advantage. Following another short punt, LaDarius Owens scored on a 10-yard run out to push the Texas Southern lead to 31-20 with 12:38 left in the game.

Jackson State scored 19 straight points after falling behind 7-3 in the first quarter. Shedeur Sanders threw a 48-yard touchdown pass to D.J. Stevens early in the third quarter, and Wilkerson’s 4-yard TD run with 3:17 to go in the game put the Tigers ahead 22-7 and iced it.

Campbell scored on a 13-yard pass from Hajj-Malik Williams to Julian Hill in the final minute. Williams was 15-of-28 passing for 131 yards and one touchdown, and ran for 31 yards and another TD.

Sanders was 23-of-31 for 233 yards, his lowest passing yardage total of the season.

Former Port Gibson star Jacory Rankin caught six passes for 93 yards and two touchdowns for Valley, and Cobie Bates had a 97-yard kickoff return. The Delta Devils, though, never led after the early part of the second quarter.

Shegog threw a 10-yard TD pass to Dohnte Meyers and scored on a 1-yard run in the first half as Delta State zipped out to a 35-0 lead at halftime.

Christian Malloy had a 57-yard TD run and Kory Gainwell a 14-yard TD run in the first half, and Joseph Barton returned a fumble 71 yards for another score.

Wilson had a 1-yard TD run late in the third quarter and a 3-yard TD run with 4:34 left in the fourth as West Florida outscored the Choctaws 24-7 in the second half. Ra’veion Hargrove had 139 rushing yards and Shomari Mason 137 for the Argonauts.

Evan Byrd added a 44-yard interception return for Rhodes, which scored 21 unanswered points in the second half.

Nic Hayes caught six passes for 117 yards for Millsaps. The Majors only had 56 rushing yards.

Tim Johnson also had 91 rushing yards on only six carries for Belhaven (6-1, 4-1). The Blazers averaged 7.5 yards per carry, and have run for 884 yards in their last two games.

Fifteen Belhaven players had at least one carry on Saturday, and eight caught a pass. The Blazers also blocked two punts.