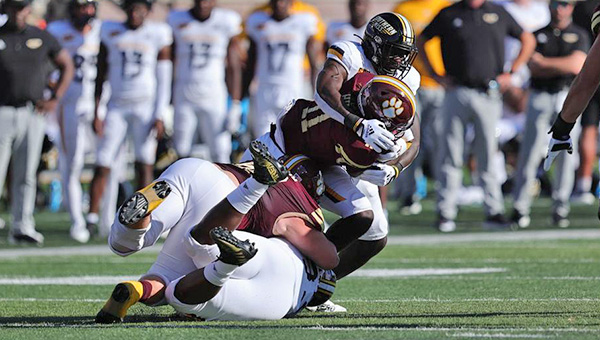 SAN MARCOS, Texas — After Texas State scored a touchdown with less than two minutes to go to take the lead, Southern Miss channeled broadcasting legend Lee Corso and said, “Not so fast, my friend.”

Texas State had taken a 14-13 lead with 1:21 to go when Layne Hatcher connected with Ashtyn Hawkins, who outran the defense for a 74-yard touchdown pass.

Texas State (3-5, 1-3 Sun Belt Conference) got to midfield on its final possession before Hatcher was intercepted by Natrone Brooks to end it.

The wild finish was a spark of life to an otherwise forgettable game that only had two touchdowns combined in the first 58 minutes. Texas State finished with minus-6 rushing yards and was 2-for-14 on third down. The Bobcats also went 0-for-2 on fourth down attempts.

Frank Gore Jr. ran for 91 yards for the Golden Eagles.

“A little bit of a loss of words with that one. It was just a sloppy football game overall,” Texas State coach Jake Spavital said. “They dominated defensively in all phases. We literally threw every single type of play out there, from screening it, to running RPO, to double-check protection and slide protection to spread it out. They dominated the line of scrimmage, (that) is what it came down to and that’s why we were 2-of-16 on critical counts. That’s terrible.”