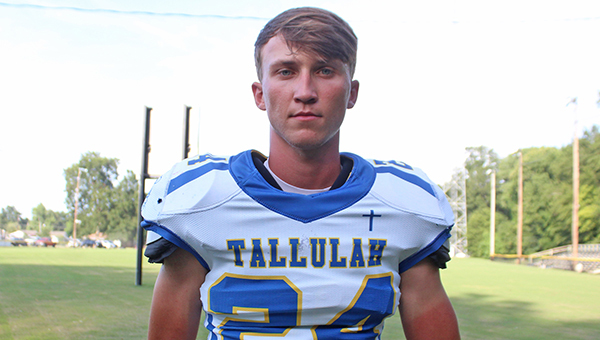 Tallulah Academy running back Wyatt Bedgood rushed for 135 yards and three touchdowns on only eight carries in a 64-20 victory over Porter's Chapel Academy on Friday.

Tallulah Academy celebrated one championship Friday night. The way it’s playing, it might not be the last.

The Trojans rolled up 441 rushing yards, scored on their first three offensive plays, and crushed Porter’s Chapel Academy 64-20 to win the MAIS District 3-2A championship.

“The team is just playing phenomenal right now. It’s just crazy how they’re executing on offense and defense. I’m so proud of the boys. At the right time, they are coming on,” Tallulah coach Bart Wood said.

Porter’s Chapel (4-5, 1-1) will stumble into the playoffs on a three-game losing streak. If there was one silver lining Friday, it was that the Eagles managed to hold on to the No. 8 seed in the Class 2A bracket. That will give them a home playoff game next week in the first round against Ben’s Ford.

“What we did tonight did not have any bearing on our playoff situation,” PCA coach Blake Purvis said with a bit of dark humor. “But the fact we’re in the playoffs and hosting a playoff game says we did enough in the regular season to earn that opportunity. Everybody is 0-0 now. If you’re in, you have just as good a chance as anybody else.”

Tallulah jumped on PCA, literally, from the opening kickoff. The Trojans started the game by recovering an onside kick and scored on a 47-yard run by Wyatt Bedgood on their first play from scrimmage.

A PCA fumble was followed by a 74-yard touchdown run by Brayson Morson. Then another onside kick led to a 45-yard TD pass from Dee Morgan to Henry Ellerbee. When the dust cleared, Tallulah led 22-0 a little over four minutes into the game.

“It was probably as bad of a start as you can have to a football game,” Purvis said. “They stole two possessions early and scored on their first three plays on offense. We turned the ball over seven times in the first half and I think they scored on six of those seven. Against a top-tier football team like that, you can’t turn it over one or two times in a game, let alone seven times in a half.”

PCA finally got on the board with a 27-yard touchdown pass from Jase Jung to John Wyatt Massey with 4:06 left in the first quarter, but Tallulah scored four touchdowns in the second and led 52-6 at halftime.
Seven of Tallulah’s eight offensive touchdowns went for 39 yards or more. It also scored on a fumble return by Morson.

“We did not have a long drive. We had big plays over and over,” Wood said.

For PCA, Jung finished with 169 rushing yards and two touchdowns on 15 carries, caught three passes for 25 yards, and threw the one TD pass to Massey.

Massey, normally PCA’s quarterback, was playing tight end when he caught the touchdown. He finished 8-of-11 passing for 74 yards.