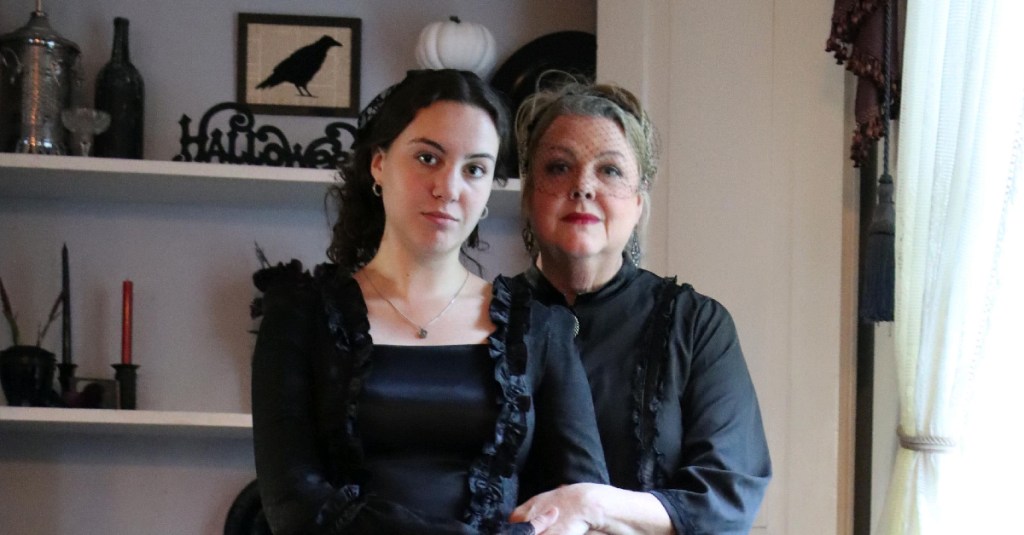 Erica Roberts, left, and Melanie Roberts pose for pictures at McRaven. Mother and daughter are part of the Candlelight tours offered in October. (Photo Submitted)

Tucked behind layers of lush greenery sits the McRaven House.

Constructed in three different time periods, the Vicksburg home has been dubbed Mississippi’s most haunted house. But don’t take someone else’s word as to the paranormal activities that dwell inside. Schedule a visit during the upcoming Candlelight Tours offered in October and experience the goings-on in an actual haunted house.

Michael Walker, who is one of the tour guides at the historic home, said all the tours presented at McRaven have an air of mystery and intrigue, but the Candlelight Tours also offer a bit of fright — all while visitors are transported back in time.

Dressed in period clothing and telling the story of their character in first person, Walker said, the guides take on the roles of the previous owners of the house and visitors will learn about their plights.

“The first thing you can expect (when you enter the house) is you will be whisked into a funeral,” Walker said. “You’ll be greeted by Miss Ellen, and she will tell you all about her dear departed brother.”

The tour will continue through the house where visitors will not only hear the stories of those who inhabited the residence; they will also be encapsulated by the spirits who roam the grounds.

Walker said he portrays Andrew Glass, who is credited for building the first portion of the house, which was constructed in 1797 — before Mississippi became a state.

Glass was a highwayman who terrorized those traveling along the Natchez Trace.

The section of the house he built, Walker said, is a simple two-room brick structure with the bedroom built above the kitchen. This allowed Glass a bit of protection from those seeking revenge on his thieving lifestyle. Glass had a removable ladder up to the bedroom to protect him from an ambush while he slept.

Walker said one of the most notable residents of the home was Mary Elizabeth Howard.

During the candlelight tours, visitors will have the opportunity, he said, to hear the story of how she died inside the home during childbirth.

Howard’s husband, Sheriff Stephen Howard, added the second portion of McRaven in 1836. This portion of the home is built in the Empire period, which is described as simple, but with decorative touches.

Walker said the tour concludes in the master bedroom of John Bobb, who constructed the third portion of the home.

“He (Bobb) lived here during the Siege and was the first civilian casualty in Vicksburg during the occupation,” Walker said.

The third section of the home was built in the Greek Revival style and in addition to Bobb’s master bedroom, it includes a men’s changing area, a parlor and a flying wing staircase.

Bobb eventually remodeled the exterior of the home. It now has an Italianate façade with “Vicksburg pillars.”

Walker said as a guide, he enjoys being part of the candlelight tours.

“I think it is a lot more fun. It’s Halloween, so we are going to have some gimmicks and scares in there for everybody,” he said, adding visitors will also be “drawn” into the history since it will become a “bit more alive.”