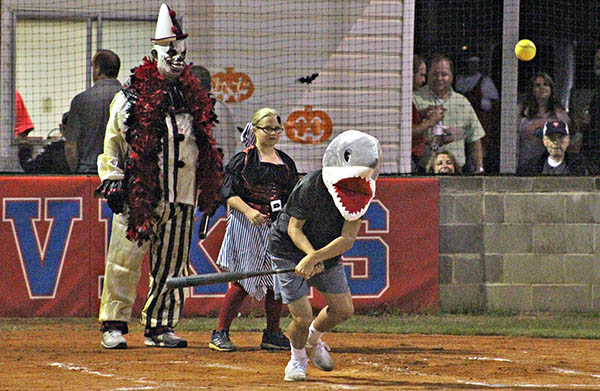 More than 2 1/2 years after the onset of the COVID-19 era, the sports world has regained its normalcy.
Players, rather than entire teams, miss games because of illness. Stadiums are packed again. And events that went on a long hiatus are coming back.

Included in that last category are a couple of fun ones in Vicksburg that appeared to have faded away — Warren Central’s Softball Spooktacular and Vicksburg High’s Ugly Sweater Game.

The two holiday-themed softball events gained a foothold prior to the pandemic, then went away for 2020 and 2021. They’re returning this year for good times and good works. The proceeds from both games will go to various local causes.

“We’re excited. For some of them, it’s their senior year and they have never gotten to do it but other people have told them about it. We’re all excited to get back to normal,” Warren Central softball coach Dana McGivney.

In case you’ve forgotten, the two events are slow-pitch softball games pitting team members rom Vicksburg and Warren Central against each other.

At Warren Central’s game, scheduled for Monday at 6 p.m. at Lucy Young Field, players and coaches from the softball and baseball teams will wear Halloween costumes while they play.

Young fans in attendance will get candy, and there’s a costume contest for players and fans. Admission is $3 for students and $5 for adults. Children under 12 who dress in costume are admitted free.

“Yeah, it’s fun. Yeah, it’s silly. The kids have a great time. But it is more about giving back to the community,” McGivney said. “That’s why we invite the little kids here. We want to give them a safe environment to come out and get candy in case their kids don’t feel safe going out in the community.”

Besides fellowship, the Softball Spooktacular will help a member of the Warren Central family. Baseball coach Jake Parker was recently diagnosed with cancer, and the money raised will go to him to help with his expenses.

Helping someone in the community has always been the purpose of the Spooktacular since it was started in 2014. In the past, the money raised has gone directly to Blair E. Batson Children’s Hospital and the families of Vicksburg children who were battling cancer.

McGivney is hoping to raise more than $1,000 on Monday night, about the total in each of its previous editions.

“This is the first year we’ve done it for a faculty member. We normally choose a child or something. But when we heard about Coach Parker we definitely wanted to try and give back to him. That makes it extra special,” McGivney said.

Vicksburg’s Ugly Sweater Game, meanwhile, will be played Nov. 5 at its Softball Swamp Field. Similar to its counterpart across town, the game will be a co-ed slow-pitch game in which players wear their fanciest — meaning most hideous — Christmas sweaters.

The game will feature current VHS softball players and alumni. Registration for the alumni will start at 4 p.m., and the game at 5.

It is also for a good cause. The proceeds benefit the Warren County Sheriff’s Office’s Christmas toy drive. The cost of admission for fans is either a monetary donation or a new, unopened toy.

Fans can also purchase “chance cards” that will throw wrinkles into the game.

Both softball games had been growing into annual traditions before the pandemic and it’s great to see them back. Let’s turn out and make them successes again.

WC Softball Spooktacular
• Monday, Oct. 24, 6 p.m.
• At Warren Central High School
• A co-ed slow-pitch game featuring players from Warren Central’s softball and baseball teams as they compete in Halloween costumes. Best costume awards and candy will be given out to children under 12.
• Admission fee is $3 for students with ID, $5 for adults, and children under 12 are free.
• All proceeds go to Warren Central assistant baseball coach Jake Parker, who is battling cancer.

VHS Ugly Sweater softball game
• Saturday, Nov. 5
• At Vicksburg High School’s Softball Swamp field, on Lee Street
• A slow-pitch softball game featuringthe current VHS softball team and alumni players, who will compete while wearing ugly Christmas sweaters.
• Registration for alumni will begin at 4 p.m., and the game at 5.
• Admission to the game is one new toy or a monetary donation of any amount, which will be given to the Warren County Sheriff Department’s annual toy drive.