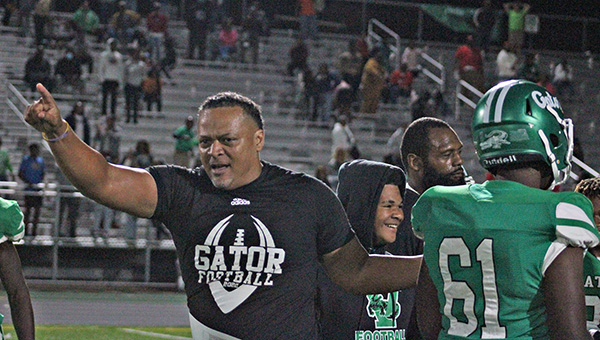 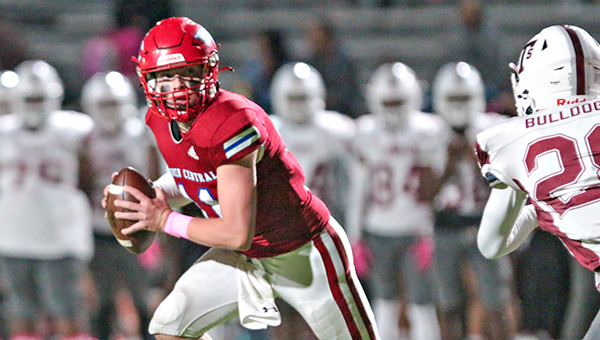 Warren Central quarterback Jack Wright (11) rolls out and looks for a receiver Friday against Terry. Wright passed for 231 yards and three touchdowns, and completed 91.7 percent of his passes as the Vikings won 35-0. (Walter Frazier/For The Vicksburg Post) 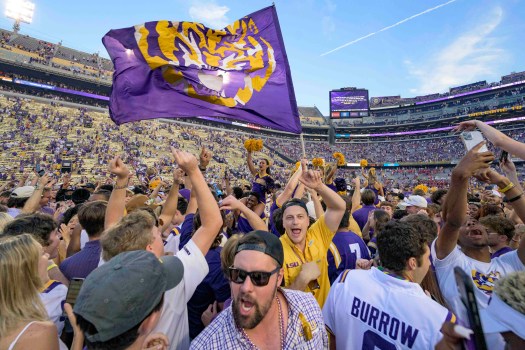 LSU fans celebrate after they came onto the field following a 45-20 win over Ole Miss on Saturday. On Sunday, the Southeastern Conference fined LSU $250,000 for violating the league's access to competition area policy. (AP Photo/Matthew Hinton) 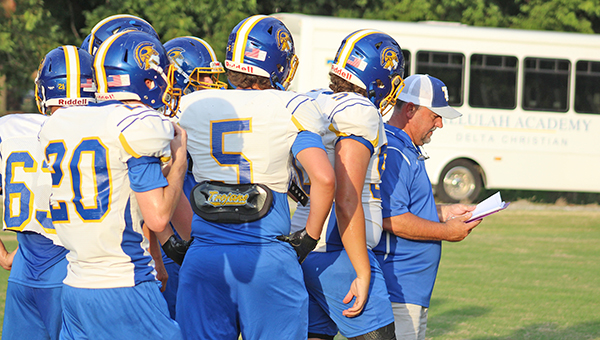 1
Todd McDaniel might have preferred to reach this milestone a couple of weeks ago. The way things worked out, though, having to wait until Friday night only made it better.

McDaniel earned his 100th career victory by leading Vicksburg High to a 14-0 win over Neshoba Central on Friday. It also clinched the program’s first region championship since 1990.

“This is sweet. My 100th victory on the day when we won the district championship. We were scrapping straight from the bottom to the top, and it makes it sweet,” McDaniel said after Friday’s game. “One thing about it — all of those hundred wins, I don’t have them if I don’t have great coaches and great kids.”

McDaniel has a record of 100-51 during a 16-year head coaching career that has included stops at Wingfield, Hazlehurst, Terry and Vicksburg.

McDaniel has an 18-15 record in two-plus seasons at Vicksburg. When he was hired in 2020, he was the program’s fifth head coach in nine years and the Gators had had three straight losing seasons. After going 4-8 in 2020, he has led them to back-to-back winning seasons for the first time since 2007-08.

McDaniel entered 2022 needing seven wins to reach the century mark, but back-to-back losses to start the season delayed the achievement. Since then, the Gators (7-2, 7-0 MHSAA Region 2-5A) have ripped off seven consecutive victories.

It is the program’s longest winning streak since the 1994 team won eight in a row, and culminated with the victory that clinched its fourth region championship in the playoff era that started in 1984.

McDaniel said checking off both accomplishments on the same night felt like fate.

“It really felt that way, thanks to the man upstairs,” he said with a smile.

2
Jack Wright had one of the best single-game performances by a Warren Central quarterback in the last 15 years during Friday’s 35-0 rout of Terry.

Wright completed 11 of 12 passes for 231 yards and three touchdowns. His 91.7 percent completion rate was the best single-game mark for a Warren Central quarterback with at least 10 attempts since at least 2007. Game-by-game stats before 2007 were not readily available.

In 2012, Alex Stevens and Carlisle Koestler combined to go 10-for-11 (90.9 percent) against Greenville, but neither threw 10 passes by themselves.

Wright also became the first Viking QB to throw three touchdown passes in a game since Jesse Wilson did it against Starkville on Oct. 28, 2016.

Wright had his second consecutive 200-yard game as well, after throwing for 203 the previous week vs. Pearl. Before that, the last time Warren Central had a 200-yard passer was Sept. 13, 2019, when Parker Kivett finished with 247 yards against Brandon.

LSU fans stormed the field in celebration following the game, and on Sunday the Southeastern Conference imposed a $250,000 fine on the university for the infraction.

It’s LSU’s third violation of the league’s access to competition area policy. LSU was last fined for a violation following its football game against Georgia in 2018.

The conference imposes financial penalties for violations across all sports, a policy that started in 2004. Fines start out at $50,000 for a first offense, $100,000 for a second offense and $250,000 for each one after that. The fine money is deposited into the SEC Post-Graduate Scholarship Fund.

LSU moved into the Associated Press Top 25 following its win, checking in at No. 18. Ole Miss dropped eight spots to No. 15.

LSU has an open date this week ahead of a showdown against No. 6 Alabama on Nov. 5 in Baton Rouge. Ole Miss travels to Texas A&M on Oct. 29.

4
“Punt” isn’t a four-letter word for the Tallulah Academy Trojans. It’s more like it’s not in their vocabulary at all.

Tallulah has only punted once in nine games so far this season. Even in 8-man football, where points and possessions are precious enough that many kickoffs are onside attempts and going for it on fourth-and-long is not uncommon, it’s a rare stat.

Coach Bart Wood said he hasn’t necessarily avoided punting, it’s just that the Trojans have been so efficient on offense that they haven’t been in a situation to do it very often.

Tallulah’s only punt came in a 36-28 loss to Manchester Academy on Sept. 9. Cade Morgan booted it 36 yards.

Tallulah has scored 60 offensive touchdowns on 336 plays this season ­— an average of one touchdown every 5.6 plays. It is 8-for-18 on fourth down attempts.

“I don’t know if we’ve gone for it on fourth down that much. We’ve been making good drives, but we’ve been consistent,” Wood said.

Almost as impressive as the lack of punts is the lack of turnovers. The Trojans have only committed eight all season, and none in the last two games.

Tallulah routed Porter’s Chapel Academy 64-20 in its regular-season finale on Friday to win the MAIS District 3-2A championship. Tallulah (8-1) will have a bye in the first round of the Class 2A playoffs this week, and then hosts the winner between Columbus Christian (5-5) and Prentiss Christian (4-6) on Nov. 4.

“Everybody played so good for our team the last two weeks. Our offensive line has just been so dominant,” Wood said. “That’s the biggest thing on us, is the offensive line is playing phenomenal and our defense is playing so good.”