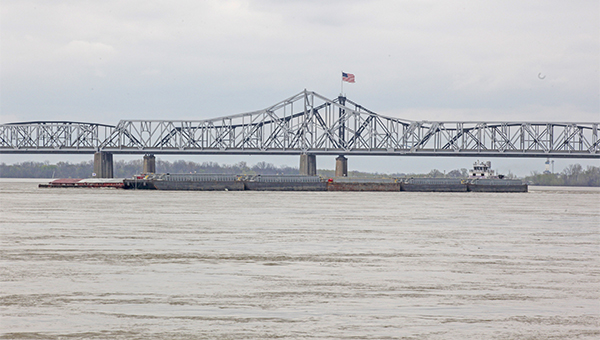 A barge travels on the Mississippi River under the Vicksburg Bridges. (Courtland Wells/The Vicksburg Post)

Motorists traveling Interstate 20 between Vicksburg and Monroe can expect periodic delays in the east and westbound lanes of the I-20 bridge over the Mississippi River as the Louisiana Department of Transportation and Development makes repairs to the bridge’s expansion joints.

Work began on the bridge Monday. Louisiana is responsible for the bridge’s maintenance.

“We’re going to have lane closures eastbound and westbound; we hope to have that wrapped up by Thanksgiving ahead of the holiday travel,” said LDOTD spokesperson Erin Buchanan. “The bridge will remain open, but there will be lane closures in both directions.”

Expansion joints allow the bridge to expand and contract during changes in temperature. Buchanan said work on the bridge’s joints involve emergency repairs caused by changes in the level of the Mississippi River.

“That bridge is continuously monitored, as well as the river conditions, and based on that, they were having to go in and allow for greater movement of the structure,” she said.

The problems with the bridge are part of a series of problems caused by low water on the Mississippi River. The low levels have forced shippers who use the river, ports and cruise lines to make adjustments to deal with the low water.

The river level Monday in Vicksburg reached below zero with forecasts indicating a rise later in the week.