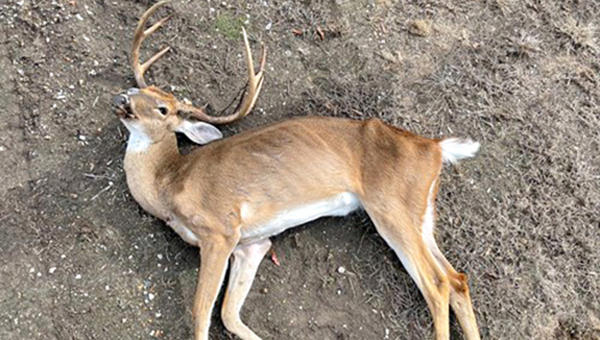 This deer suspected of having Chronic Wasting Disease was found in Warren County in December 2021. (Photo courtesy of the Mississippi Department of Wildlife, Parks and Fisheries)

By Hunter Cloud | The Natchez Democrat, special to The Vicksburg Post

Chronic Wasting Disease has been detected in Warren County for a third time within a year.

Mississippi Department of Wildlife, Fisheries and Parks first confirmed a case in Warren County in December of 2021.

These cases were near Mississippi’s first case of CWD detected in Issaquena County in 2018. Deer Program Coordinator William McKinley said the positive came from a hunter-harvested buck approximately 2 miles east of the other positives in Warren County. It was a 2-year-old buck.

McKinley said the positive would not change the CWD management zone. The zone includes all of Warren and Claiborne County and Issaquena County east of the Mississippi River and south of Highway 14. Hunters in Warren County have submitted 14 CWD samples this deer season.

Chronic Wasting Disease is a neurological disease that is always fatal to deer and is caused by an infectious prion, a misfolded protein. Deer infected with CWD spread the disease as they shed bodily fluids, hair and fecal matter containing those prions into the environment.

MDWFP’s management approach for CWD is based on surveillance of the disease through hunter-harvested CWD samples and containment through hunter-harvests. Deer hunters in Warren County can visit two 24-hour freezer locations to drop off samples. One is at Phil Bryant WMA located at 11641 Hwy 465 in Vicksburg, and the other is at Communications Specialists at 760 US-61 North. A list of freezer locations is on the MDWFP website under the CWD tab. Since 2018, Warren County has submitted 1,434 samples for CWD testing.

Hunters should strongly consider testing deer for CWD, according to the North American Center for Disease Control.

“In areas where CWD is known to be present, CDC recommends that hunters strongly consider having those animals tested before eating the meat,” the CDC chronic wasting disease prevention article said.

Louisiana Department of Wildlife and Fisheries is focusing CWD sampling efforts in areas of the state with earlier breeding dates and firearm seasons. Deer Program Director Jonathan Bordelon said they had collected one sample from the CWD management zone in Tensas, Franklin and Madison Parishes.

He added the wildlife agency is working to collect samples in Union and Morehouse Parishes. These parishes are close to a harvested CWD positive about eight miles over the border in Arkansas. LDWF’s hope is once firearm season opens in the delta, they will receive more samples at their drop-off freezer locations in the management zone. Sample collections at the end of the season would provide a better understanding of the CWD picture in Louisiana, Bordelon said.

“We aren’t sure how quickly things will change. After the initial positives in Issaquena County, no positives were found there for a few years. We were hoping for fewer positives and a slower spread in the environment,” Bordelon said. “Each positive detected near our border points to the possibility that the disease might increase in prevalence. It is concerning. At this point, there is so much awareness from our hunters in the CWD zone. They might not agree with the strategies of mitigation or the level of threat, but they were aware. If there were any sick deer there is a better chance of them being reported than there was 10 years ago. Our first positive was a result of that. We will see this fall.”