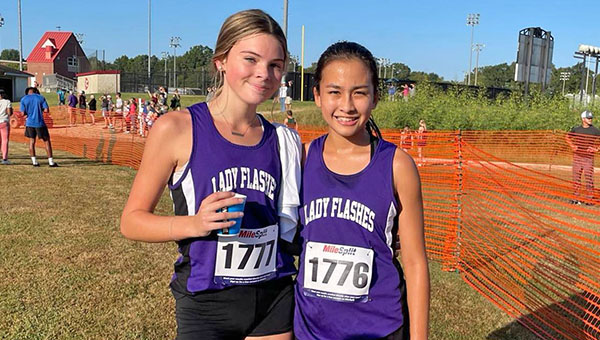 St. Aloysius cross country runners Hendrix Eldridge, left, and Samantha Edwards pose for a photo together after a race in September. The two runners finished third and fourth, respectively, at the MAIS Class 5A Cross Country Championships Monday in Clinton. (Submitted to The Vicksburg Post)

The St. Aloysius duo finished three seconds apart, with Eldridge in third place and Edwards in fourth, at the MAIS Class 5A Cross Country Championships Monday at Choctaw Trails in Clinton.

It was the seventh top-five finish in seven races this season for the eighth-grader Eldridge. She won three races and finished this one with a time of 21 miniutes, 1 second.

Edwards, who won the 2021 Class 5A championship, crossed the line in 21:04. She won two races this season and had her sixth top-five performance.

Simpson Academy freshman Layla Warren won the individiual title with a time of 19:55, and her teammate Lilly Overby was second in 20:41.

East Rankin Academy had six runners among the top 16 and scored 52 points to beat Columbia Academy for the team title. Columbia also scored 52 points, but the fifth-place finish by East Rankin’s Audrey Mayatte served as the tiebreaker.

Simpson Academy was third in the team standings, with 64 points. In cross country, runners are scored in line with their finishing position — first place receives one point, second place two, and so on — and the lowest team score wins.

Heritage Academy’s Sidney Stegall won the individual championship in 16:17, and Cathedral took the team title with 52 points. Cathedral had four runners among the top 12, led by Alex Monagan’s fifth-place finish.

Silliman Institute placed second out of 11 teams, with 57 points, and Columbia Academy was a distant third with 99. St. Aloysius was eighth, with 187 points.

PCA totaled 127 points to finish fifth out of five teams. Providence Classical had six of the top 11 runners — including individual champion Micah Glorioso, who had a time of 18:12 — and totaled 24 points to take the team title.