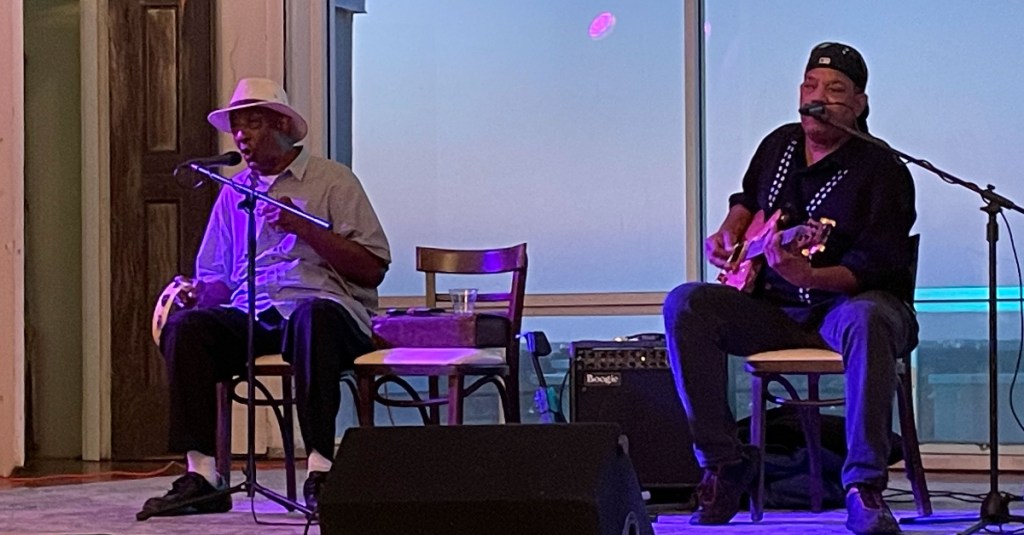 Calvin “Dr. Who” Carson and Mark “Duvelle” Doyle perform at the B.B. Club in Downtown Vicksburg. The duo kicked off the musical entertainment that will now be offered in the historical building. (Photo Submitted)

Nightlife in downtown Vicksburg is expanding.

In September, the B.B. Club hosted its first musical event when The Blues Experience — Calvin “Dr. Who” Carson and Mark “Duvelle” Doyle — entertained patrons in the historical building’s ballroom.

Hoben, who serves as the booking agent for musical events for Downtown Vicksburg’s Second Saturday, said he is also working with B.B. Club owner Derek Howard to bring additional entertainment to the River City.

Howard and Hoben, both Vicksburg natives, said they both believed additional entertainment in Vicksburg could enhance the exciting revitalization that has and is continuing to happen downtown.

“I’ve always had something like this pictured in my head,” Howard said. And now after reaching out to Hoben, the idea has become a reality.

“Derek called me and said, ‘Hey I’m thinking about turning the upstairs (of the B.B. Club) into a music venue. Would you want to help me?’ I said, ‘Well for sure I would,’ because I have been thinking about doing something like this for a couple of years myself,” Hoben said.

After a good first start, Hoben said, more concerts are planned, which include the upcoming event on Saturday, Oct. 29. Mississippi Songwriter of the Year finalist Naomi Taylor and the Mississippi Shakedown blues and garage rock band are set to perform.

On Nov. 19, four metal bands will take to the stage.

“We have three local metal bands and one from out of town, so it’s going to be a four-band show the same night,” Hoben said.

On Dec. 16, Bethany Clark, a former member of The Crow Band, will perform.

Hoben said the band has recently split, but Clark, who was the lead singer for the group, reached out to him about performing at the B.B. Club.

“She (Clark) said, ‘Hey I got a little duo going on. Do you think you could fit us in at the B.B. Club?’ I said, ‘Of course, that would be awesome,’” Hoben said, adding that Thomas Barnes, who is a musician from Jackson will open the show.

“That’s going to be an amazing show,” Hoben said.

All performances will begin early, “Around 5 p.m., and last until about 10 p.m. These are early events to not super late at night,” Hoben said.

For the Nov. four-band performance, the cover charge is only $5.

Food and beverages are also available for purchase, but Hoben said the B.B. Club is not a bar.

“We are a venue where you can come in for a music experience,” he said.

Howard said the B.B. Club will also remain a venue for wedding receptions, banquets, luncheons and dinners with musical performances offered when the facility is not being rented otherwise. They will also continue offering casseroles during the week.

Both Hoben and Howard said they are excited about having the B.B. Club as a music venue.

“It’s like all the stars just kind of aligned at the perfect moment,” Hoben said.