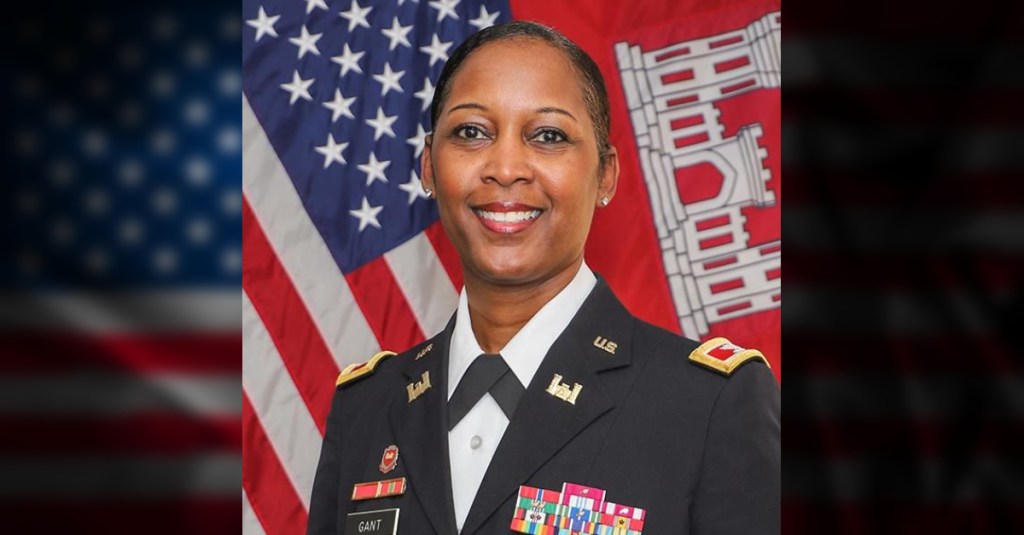 Colonel Antoinette ‘Toni’ Gant, a Port Gibson native, will be promoted to Brigadier General (BG) in the United States Army this week.

She is also the first African American female to serve as a division commander in the U.S. Army Corps of Engineers and will be the first AA Female (active duty) to reach the rank of Brigadier General in the history of the Engineer Regiment.

Gant will be pinned officially on Friday at 1:30 p.m. in the Donald Clarke Juvenile Justice and Psychology Building at Prairie View A&M University, where she graduated in 1994 and participated in the Army ROTC.

Gant became the Commander and Division Engineer of the South Pacific Division (SPD), U.S. Army Corps of Engineers on July 9, 2021.  Established in 1888 and headquartered in San Francisco, SPD is one of nine USACE regional commands. The region encompasses all or part of ten states with four operating districts headquartered in Albuquerque, Los Angeles, Sacramento, and San Francisco.

As the SPD Commander and Division Engineer, she is responsible for leading a workforce of more than 2500 military and civilians, overseeing hundreds of water resource development, military and interagency design and construction projects valued at more than $16 billion in support of our communities, our Nation, and our warfighters.

In 2012, Gant sent a congratulatory letter to Brigadier General Margaret Burcham on her promotion as the U.S. Army Corps of Engineers’ first female general officer.

“This was huge, especially for someone like me,” Gant said. “I just wrote this letter, and I said, ‘Hey ma’am, I know we have never met, but I think it is an honor for you to be the first female engineer general officer. Thank you for what you are doing.”

In 2018 she had the pleasure to introduce Burcham at a leadership development meeting. Burcham became a mentor to her, and now 10 years later, Gant is gaining her star.

Gant has served in a variety of command and staff positions for engineering units stateside and abroad. Prior to South Pacific Division, Gant was commander of the U.S. Army Corps of Engineers South Pacific Border District from July 2020 to June 2021. Gant previously served as the combined joint engineer for the Resolute Support and OFS headquarters, Kabul, Afghanistan, military assistant to the Assistant Secretary of the Army-Civil Works, Washington, DC, chief of operations for the engineer directorate, U.S. Army South, Fort Sam Houston, San Antonio, Texas, and the director for the Directorates of Public Works and Installation Support, ASG-Kuwait.

She also served as the Executive Officer for Special Troops Battalion and Brigade Engineer, 4BCT, 4thInfantry Division, Fort Carson, Colorado. Other USACE assignments include Commander for both the Albuquerque and Louisville Districts. She has deployed in support of Operation Iraqi Freedom, Operation Enduring Freedom, and Operation Freedom Sentinel.

A strong advocate for STEM, Gant has worked to develop partnerships with agencies and organizations to promote science, technology, engineering, and math initiatives. She has received several national and community awards, including the 2021 Black Engineer of the Year Conference Awards (BEYA), Army Stars and Stripes Award recipient, the 2020 Women of Color Career Achievement in Government Award, the YWCA Women on the Move Award, Women of Influence in Government by Albuquerque Business First, BEYA Special Recognition Award, and Alpha Kappa Alpha Sorority, Inc., South Central Region Visionary Leader and Global Leader Awards. She is an initiate of the Zeta Gamma Chapter of Alpha Kappa Alpha Sorority, Inc. at PVAMU.

Gant is married to Leonard Gant of Kansas City, Mo., who is a Middle School Math Educator. They have two children, Lauryn, a third-year doctoral veterinary medicine student at Tuskegee University and Leonard II, a sophomore at Florida A&M University studying Business Administration with a concentration in Supply Chain Management.