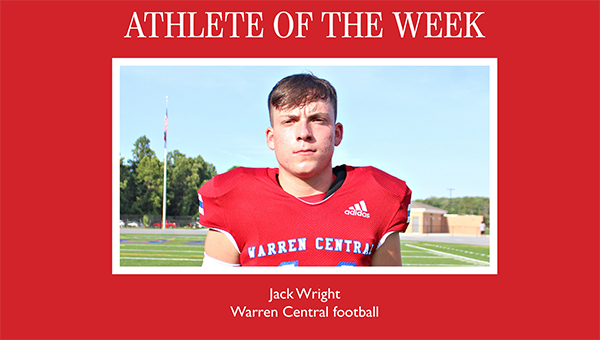 Jack Wright had one of the best games by a Warren Central quarterback of the past 15 years, and it helped him add his name to the rolls of Vicksburg Post Athlete of the Week award winners.

Wright, a senior, received 411 of 738 votes cast in an online poll by The Post’s readers for the weekly award.

Wright completed 11 of 12 passes for 231 yards and three touchdowns in a 35-0 rout of Terry on Oct. 21. His 91.7 percent completion rate was the best single-game mark for a Warren Central quarterback with at least 10 attempts since at least 2007.

Wright also became the first Viking QB to throw three touchdown passes in a game since 2016, and had his second consecutive 200-yard game as well. Before that, the last time Warren Central had a 200-yard passer was Sept. 13, 2019, when Parker Kivett finished with 247 yards against Brandon.

Congratulations to Jack and the other nominees, and thank you to our readers for voting.