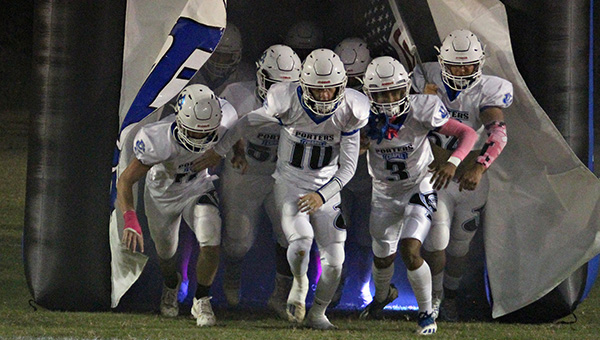 Porter's Chapel Academy's football team will host Ben's Ford in the first round of the MAIS Class 2A playoffs on Friday night. (Ernest Bowker/The Vicksburg Post)

A lot of things have gone wrong for Porter’s Chapel Academy the past three weeks.

It lost three games in a row. It missed its shot at a district championship, and it even wound up on the tougher side of the MAIS Class 2A playoff bracket because of it.

One thing that did go right, however, was that it managed to hang on to the No. 8 seed. That will keep the Eagles (4-5) home for their first-round game Friday vs. Ben’s Ford (4-5), avoid a four-hour road trip and, they hope, be the shot of adrenaline needed to advance a bit deeper into the postseason.

“Any time you can avoid a long trip like that, it’s always a good thing,” PCA coach Blake Purvis said. “Playing at home, in a familiar environment, is hopefully what we need to get back on track.”

Porter’s Chapel won 30-20 at Ben’s Ford on Sept. 16, but has struggled to find much consistency since. It lost four of five games and was outscored 142-36 in the last three.

In last week’s 64-20 loss to Tallulah Academy, the Eagles committed five turnovers and allowed Tallulah to recover two onside kicks in the first half.

Two fumbles came on dropped punt snaps, and two more came when regular shotgun snaps hit a receiver coming in motion. One fumble ended a promising drive inside the 20-yard line, and another gave Tallulah the ball inside the PCA 10.

Getting back to what was working in the middle part of the year, when PCA won three of four games, is crucial to keeping the season alive another week, Purvis said.

“We’ve got to get back to the mindset of, we control ourselves. Those unforced errors are things we need to avoid. It’s a mental thing that we’re lacking, being able to lock in and focus week after week, or play after play,” Purvis said. “Even in this three-game skid there’s been good things. It’s a lack of consistency that’s killing us.”

Purvis added that minor injuries and absences contributed to the late-season swoon. No players were lost for the season, but enough have missed time here and there that PCA has only had its full roster available for two of its last six games.

“You look at being down a couple of men, and guys are having to play more than you expected or are in different positions,” Purvis said.

Whatever happens Friday, just being in this position marks a step forward for PCA’s football program.

A win Friday would be the program’s first in the postseason since 2008.

“Getting back in a league where we can compete in, with teams that match our school, is great. And competing in that league is great, too. I definitely think we’re moving in the right direction,” Purvis said. “We’ve definitely made huge strides the last two years. Hopefully we can build on it.”