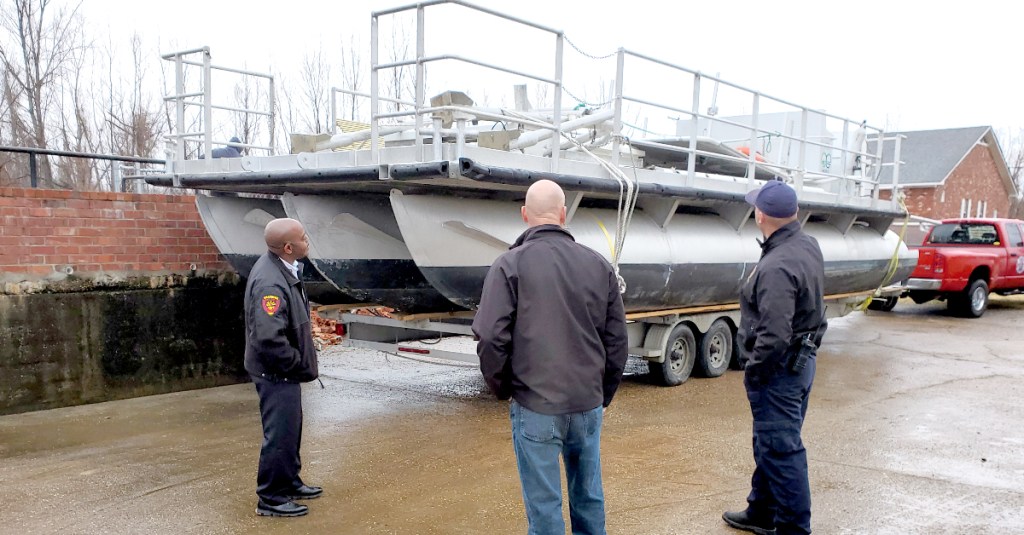 Then-Deputy Fire Chief Derrick Stamps, left, Fire Chief Craig Danczyk and Lt. Joseph Rushe look over the pontoon boat donated to the city by the Mississippi Department of Environmental Quality. The Board of Mayor and Aldermen at its Tuesday meeting declared the boat surplus. (Photo by John Surratt | The Vicksburg Post)

A pontoon boat acquired by the Vicksburg Fire Department in late 2020 is going up for sale to the highest bidder.

“We’re going to try to put it up for auction,” Fire Chief Derrick Stamps said.

The Board of Mayor and Aldermen at its Tuesday meeting declared the boat surplus, clearing the way for its sale. Stamps told the board the boat did not fit in the department’s future plans.

“It’s too big for the strategy we want to do,” Stamps said. “It’s actually been sitting there (at the fire department’s training center) since 2021.”

He said the fire department has a boat, adding it is smaller than the pontoon boat.

“He didn’t see a need for it,” Martin said. “It’s a very large vessel. We were in agreement that it probably wasn’t going to be suitable for us to put money into it.”

The three-pontoon boat was acquired from the Mississippi Department of Environmental Quality, which donated the craft, in December 2020. The boat was delivered to the training facility in January 2021.

It was one of several large pontoon boats bought by DEQ during the BP oil spill to use as oil skimming boats. Later, the boats were used as research boats to take water samples and monitor the coast.

Then-Fire Chief Craig Danczyk, who picked up the boat in Bay St. Louis and brought it to Vicksburg, said at the time the craft could have several functions, including serving as a dive platform for the department’s dive team or, with the return of the cruise boats to the city, mounting a fire pump on the boat.

Having a pump on the boat, he said, could help improve the city’s fire rating in the future.