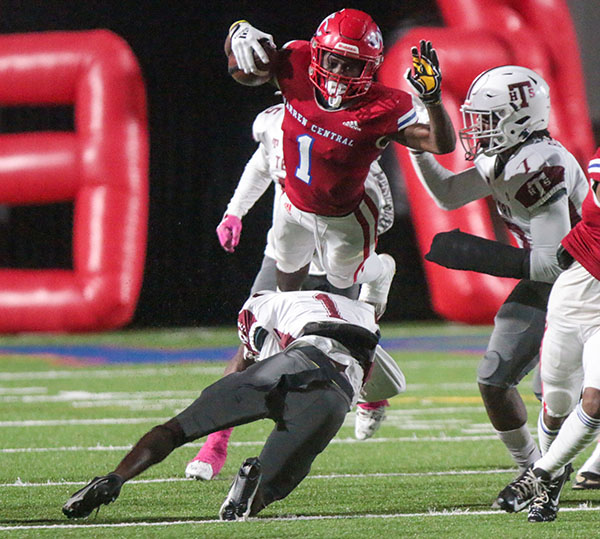 Warren Central running back Trey Hall flies through the air as he's tripped up by a Terry defender during last week's game. Warren Central will go on the road this Friday night to play Petal. (Walter Frazier/For The Vicksburg Post)

One big upset jumbled the Region 3-6A playoff picture. Fortunately, Warren Central has a simple plan to stay a step ahead of the mess — just win.

The Vikings can clinch a playoff berth by beating Petal Friday, and also have a path to the region championship. A host of different scenarios are still in play, but all of the good ones require the Vikings to stay hot and keep winning.

“When you control your own destiny, that would definitely be the most favorable scenario for us and right now we can do that. That would put a stop to all of that — just win,” Warren Central coach Josh Morgan said.

Warren Central (7-1 overall) is in a four-way tie with Northwest Rankin, Brandon and Oak Grove atop the Region 3-6A standings with 4-1 records in league play. Oak Grove knocked off then-No. 1 Brandon last week to create the logjam.

Warren Central defeated Northwwest Rankin and Oak Grove earlier this season, but lost to Brandon and could end up on the wrong end of several three-way point differential tiebreakers.

Northwest Rankin plays Brandon this week and Oak Grove next week, and those results could help or hurt Warren Central.

There is also a scenario where Warren Central could miss the playoffs if it loses its last two games.

The bottom line is, with two games to play in the regular season the Vikings could go from sitting pretty to fighting for their playoff lives if they don’t take care of business vs. Petal.

“My focus and our thought process is one week at a time,” Morgan said. “We want to lock into this week and prepare for a dangerous Petal team, and continue to just win. We want to focus on us and getting better. I think that’s the best way to approach it.”

Petal (3-6, 0-5 Region 3-6A) is winless in region play and will miss the postseason for the second season in a row, after making it the previous 13. Morgan said they remain a talented and dangerous opponent, however.

The Panthers have suffered two region losses by a total of 12 points, and another by 11. Going on the road for 2 1/2 hours, Morgan added, is also never easy.

“They’ve been in every game that they’ve played. They do a lot of good things and have a lot of good players. It’ll be another big road trip for us,” Morgan said. “They’re a good program and a good football team. They’ve had some stuff go against them, but they’ve been right there in every one of them. We’re going to have to play well.”

Fortunately, the Vikings have been playing very well of late. They’ve scored at least 35 points in their four region wins and are coming off a 35-0 thrashing of Terry last week.

Warren Central is off to its best start since the 2016 team started 8-1, and are hoping for a stretch run to match it. A win Friday — or a Meridian loss to Terry — would clinch the program’s 11th consecutive trip to the postseason.

“We’re off to one of our best starts that we’ve ever had. We’re getting better every week and playing good football,” Morgan said. “We’re taking care of the football and making explosive plays, creating and scoring on defense. Our plan is to continue that trend and continue playing well, and finish our district schedule the right way.”