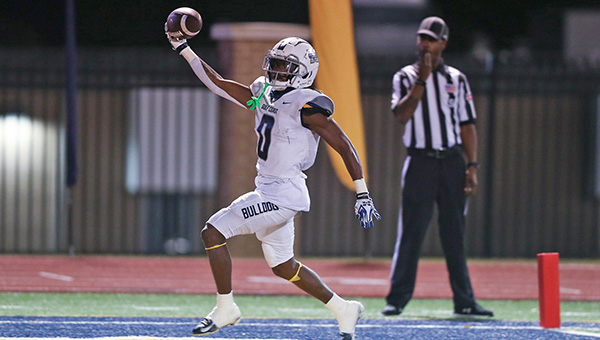 Just like they did all season, Mississippi Gulf Coast came on strong in the second half and wound up on top.

The Bulldogs scored 21 unanswered points in the third quarter to surge past Jones College, 38-24, on Thursday and claimed the Mississippi Association of Community College Conference South Division championship.

Gulf Coast (6-3, 5-1 MACCC South) won its fourth game in a row after losing three of its first five. It will host a first-round MACCC playoff game against East Mississippi on Nov. 5.

Jones would have won the South Division title if it had beaten Gulf Coast on Thursday, and it did lead 24-17 at halftime. Alan Follis threw two touchdown passes, while D.J. Smith threw one. Smith also ran for 88 yards.

The third quarter, however, belonged to Gulf Coast.

Cam Thomas tied the game with a 21-yard touchdown run, and then Pat McQuaide hooked up with Ramone Bradley for touchdown passes of 53 and 9 yards to put the Bulldogs ahead 38-24. The three touchdowns came in a span of 9 1/2 minutes. Gulf Coast also controlled the ball for 11 minutes in the fourth quarter, although it did not score any more points.

McQuaide finished 20-of-30 passing for 289 yards and three touchdowns, and added a rushing TD. Thomas ran for 191 yards and one touchdown on 33 carries, while Bradley caught five passes for 100 yards and two TDs. Keymari Odum had eight receptions for 116 yards and a touchdown.

Jones gained a total of 55 yards and committed one turnover on its four possessions in the second half.

“We went into halftime and we had a little brotherhood speech, same as we did at Co-Lin,” said Gulf Coast defensive end Torren Coppage-El, who had four tackles. “We just clicked. We made some adjustments and just played hard. We brought a lot of juice.”

Kiron Benjamin and Carl Robinson each caught one touchdown pass and ran for another score for East Mississippi. The Lions will play at Mississippi Gulf Coast on Nov. 5 at 5 p.m.

Northwest’s defense scored on a 15-yard fumble return by Sam Brumfield in the second quarter and a 32-yard interception return by Jay Adams in the fourth. It forced five turnovers.
Northwest Mississippi (9-0, 6-0 MACCC North) won the North Division championship and will host Jones College on Nov. 5.

Co-Lin 28, Hinds 14
Johnnie Daniel rushed for 86 yards and scored the game-winning touchdown on a 46-yard run with 7:17 left in the fourth quarter as Copiah-Lincoln (5-4, 3-3 MACCC South) defeated Hinds Community College in the season finale for both teams.

DeVon Tott completed 13 of 24 passes for 207 yards and two touchdowns for Co-Lin, and also scored a 5-yard rushing TD.

Jeffrey Pittman had game-high 154 rushing yards on 20 carries, and scored a touchdown for Hinds. Ranson Oakes was 16-of-26 passing for 164 yards. Oakes threw one interception and was sacked five times.

“It was definitely an up and down year,” Hinds head coach Larry Williams said. “Our kids played extremely hard, but we were often very inconsistent this season. I really wanted this final game for our sophomores because they have won so many big games for us. I can’t say enough how proud I am of their contribution to this program’s future.”

Former Vicksburg High star Michael Montgomery had five tackles for Pearl River, which finished the season on a three-game winning streak. The Wildcats had their first six-win season in 12 years.

Former Warren Central standout T.J. Thompson had a game-high 16 total tackles and one tackle for loss for East Central.

Southwest’s only touchdown came on a 45-yard pass from Chris Roberson to Tyler Daniels in the fourth quarter. Roberson was 23-of-41 passing for 219 yards.