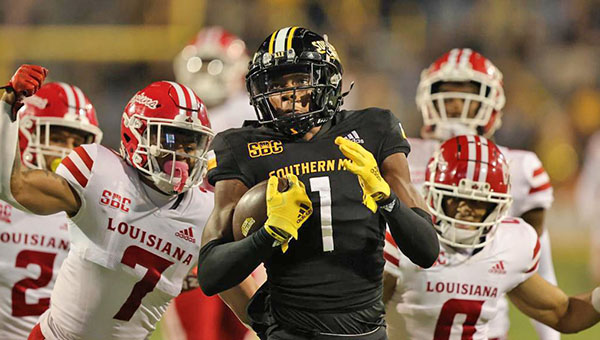 HATTIESBURG — It had been nearly 30 years since Louisiana-Lafayette defeated Southern Miss. It’ll be at least one more.

Running back Frank Gore Jr. rushed for 87 yards and threw a touchdown pass as Southern Miss beat Louisiana-Lafayette 39-24 on Thursday night for its 10th consecutive win in the series.

Southern Miss (5-2, 3-1 Sun Belt Conference) has not lost to Louisiana-Lafayette since 1993, and not in Hattiesburg since 1989. This was the first regular-season meeting between the teams since 2008.

The Golden Eagles also moved within one victory of becoming bowl-eligible after winning a total of six games in 2020 and 2021.

The Southern Miss defense intercepted Ben Wooldridge three times, including Natrone Brooks’ 52-yard pick-6 with 1:14 left in the fourth quarter. Two other possessions in the second half ended on downs and one with a fumble.

Wooldridge was 22-of-47 passing for 370 yards and two touchdowns for Louisiana (4-4, 2-3). Michael Jefferson had six catches for 179 yards, including a 63-yard touchdown late in the first half.

Zach Wilcke was 8-of-17 for 137 yards with two touchdowns and one interception for Southern Miss, which raced out to a big lead in the first half.

Southern Miss had a touchdown pass on two straight offensive plays late in the first quarter. Gore took a direct snap and lofted it to Tiaquelin Mims over the middle for a 52-yard touchdown. After Louisiana went three-and-out, Brownlee caught a short pass from Wilcke and raced for a 76-yard touchdown, outrunning four defenders the last 50 yards to the end zone.

Wilcke’s 12-yard TD to Brownlee with 5:29 left in the second quarter put the Golden Eagles ahead 29-5.
Brownlee finished with three receptions for 102 yards and two touchdowns, and Mims added 69 receiving yards and a score.

Despite its offensive missteps, Louisiana mounted a comeback and had the ball with a chance to drive for the tying score late in the game. Wooldridge threw a 63-yard touchdown pass to Jefferson late in the first half and a 9-yarder to John Stephens in the third quarter to cut it to 29-17.

After The Cajuns were stopped on downs at the USM 4-yard line, Gore fumbled it right back to them on the next play. Terrence Williams cashed in the gift with a 1-yard touchdown run to make it 32-24 with 3:12 to go.

The Cajuns got a defensive stop and the ball back at their own 18-yard line a minute later, and Wooldridge completed a 20-yard pass to Errol Rogers Jr. on the first play. Wooldridge’s next two passes were incomplete, however, and he was sacked on third down. On fourth down he was hurried and heaved it over the middle, where Brooks picked it off and returned it for the game-sealing touchdown.

It was Louisiana’s fourth turnover of the game.