FACES OF THE FLOODS: 91-year-old South Delta man reflects on lifetime of running from water 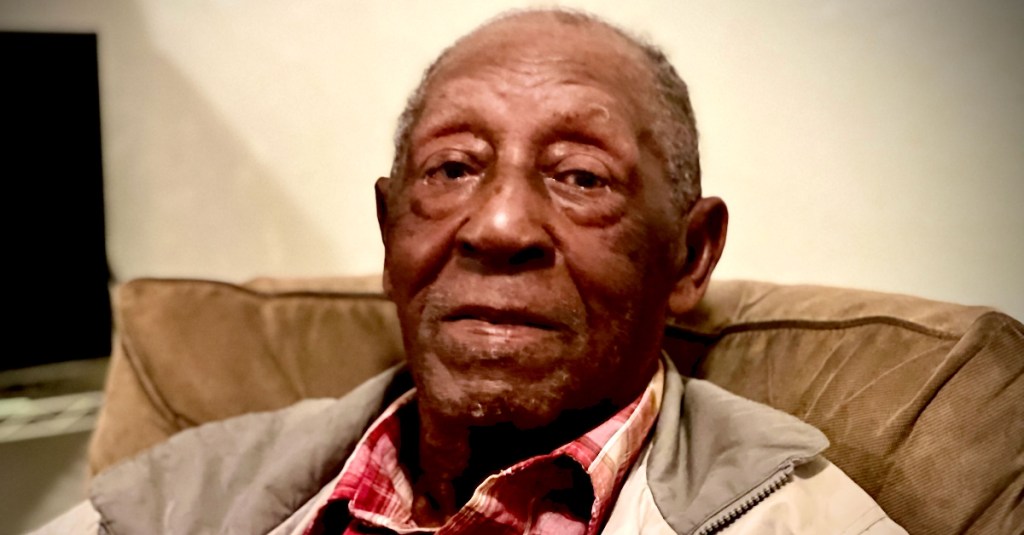 When Fitler native Percy Chocolate is asked how many floods he’s lived through in the South Mississippi Delta, his answer is, “All of them.”

Born in 1931 and now a healthy 91 years old, he’s not far off from the truth. The only flood he missed is the Great Mississippi Flood of 1927. What floods he didn’t see with his own eyes, now clouded with age, his parents and grandparents — and great-grandparents — saw in their lifetimes on the same plot of land where Chocolate was born and raised.

Speaking in his trailer home in Cary, Miss., where he’s lived since being displaced during the 2019 flood, Chocolate said there’s one truth he knows above all others about the catastrophic flooding in the backwater.

“When that water comes up, you’ve got to go,” he said. “You can’t stay in it. You either have to get out or swim out. Water and fire (are the) two most dangerous things there is.”

Chocolate’s trailer, just inside the Cary town limits, is 10 miles from his birthplace in Fitler. However, it’s a world away from the life he and his extended family had on their property that quite literally borders the Yazoo Backwater Levee system and is a steep climb and a stone’s throw from the Mississippi River.

As a child in the late 1930s or early 1940s — the exact date faded from his memory — Chocolate recalled going to the woods with his family to saw logs to place under their home as a means to elevate it just high enough that the floodwater wouldn’t seep through the floorboards.

“We had a mule chained with three or four of (the logs) and made a straight haul to the house,” he said. “We stayed there (in the house) until the water went back. It didn’t stay long back then, though. We had a boat and tied it to the porch. … so we could step out on the porch and get in the house.”

On one occasion in his childhood, Chocolate, his family members and others in Fitler constructed what he called a “shack” built on one side of the levee.

“It wasn’t something we stayed in, but we went there when we had to,” he said. “Water didn’t get over the levee. And when the water went back down, we could go back home.”

Those who didn’t have shacks slept in the open air on the levee.

In 1973, the Chocolate family was forced to flee their home when the floodwaters threatened it and evacuated with the help of the National Guard. Chocolate’s daughter, DeBorah Williams, said she has vivid memories of the day they left.

“(My parents) were at work, and they contacted them and told them they had to rush home because the National Guard was coming in. My mom had tears in her eyes, telling us to just get what we could,” Williams said. “That was a time when we really were running. We were running to these big trucks, just throwing stuff, and… all we had was what we were able to fit on the National Guard Trucks.”

Although they were forced to leave every year, they always returned home. The 2019 Yazoo Backwater Flood changed everything.

In 2019, Chocolate and his wife, Dorothy, were forced to leave. Williams and her husband were on-hand to move her parents to dry ground. Having to run from the floodwaters yet again was an awful feeling, Chocolate said.

The move, Williams said, played a large part in her mother’s death in early 2020.

“That Fourth of July night in 2019, I went to my brother’s and she was so sick, she couldn’t get out of the house,” Williams said. “That’s how it started, because she had said before that she wasn’t going back. She expressed that so many times, that this time she said, ‘I’ve seen it my whole life.’

“She just was at that point in life, and it just worried her and worried her until she had a mild heart attack, and then a massive stroke.”

Williams said she believes the troubles her family and other families in her corner of the South Delta face is a product of the “haves and the have-nots.” Out of more than six large families living near them — Percy and Dorothy Chocolate’s was one of the smallest with only four children — none have been able to return to their homes since 2019.

“There are still two worlds. When the flooding comes, it affects everyone,” Williams said. “But what happens is, the recovery is a different world for the two races of people and the haves and the have-nots. That’s where the problem is.”

Due to financial hardships on top of living in Mississippi’s poorest county, many families like the Chocolates and others historically weren’t able to spare funds for things like higher ring levees or mold removal. Add in factors like advanced age or disability, she said, and the problems compound.

For Williams, the Yazoo Pumps Project isn’t enough to remedy the problems plaguing her community.

“The pumps, yes — it will help,” she said. “But the thing of it is, all of these years, the pumps haven’t been here. But there are people who have been here and have survived because they got the services they need.”

However, she added, there are so many who haven’t been able to return because of a lack of services and funds available to them.

“It’s so heartbreaking,” she added. “Nothing but promises and people and that’s the reason why some (residents) say forget it.”