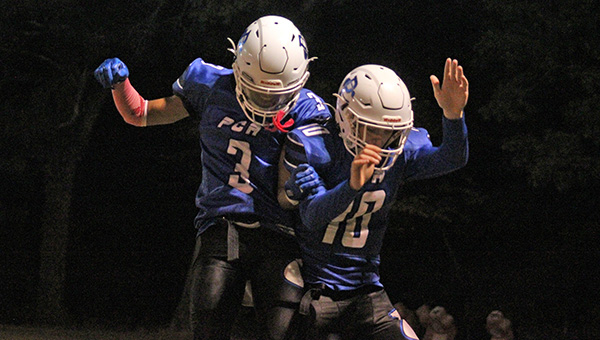 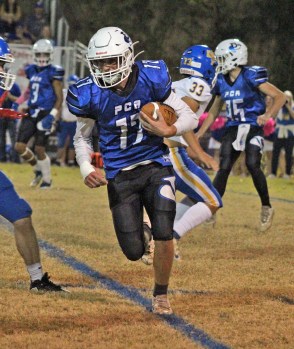 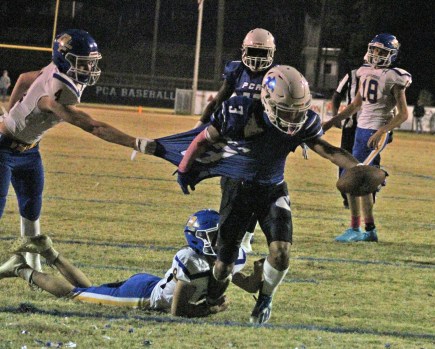 Porter's Chapel Academy running back Jase Jung (3) fights through a tackle to get into the end zone during an MAIS Class 2A playoff game vs. Ben's Ford on Friday. Jung ran for 105 yards and two touchdown, threw a touchdown pass, and had a team-high eight tackles and two interceptions on defense. (Ernest Bowker/The Vicksburg Post) 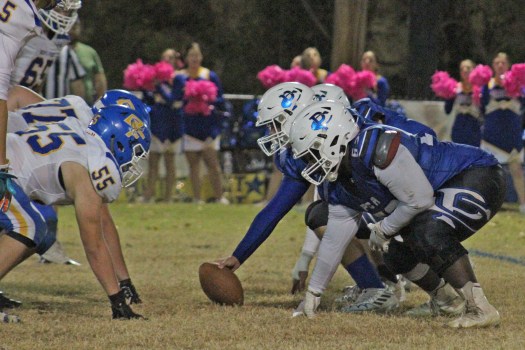 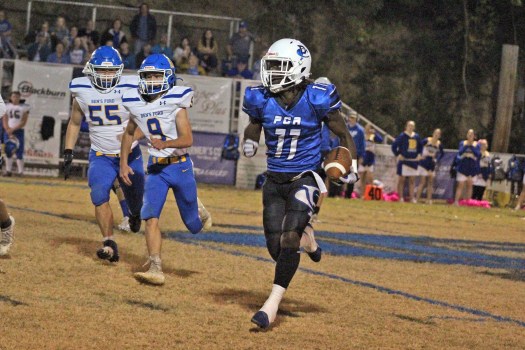 Porter's Chapel Academy running back Ty Mack (11) carries the football against Ben's Ford. Mack ran for 98 yards and scored the game-winning touchdown with 1:03 to go in the Eagles' 36-30 victory. (Ernest Bowker/The Vicksburg Post) 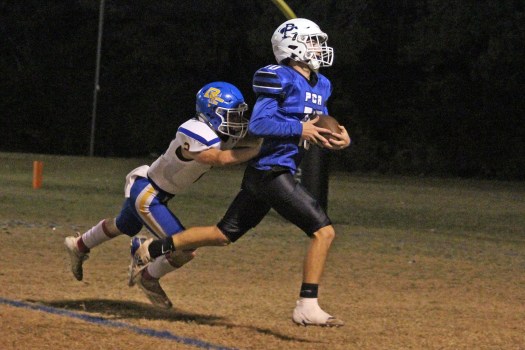 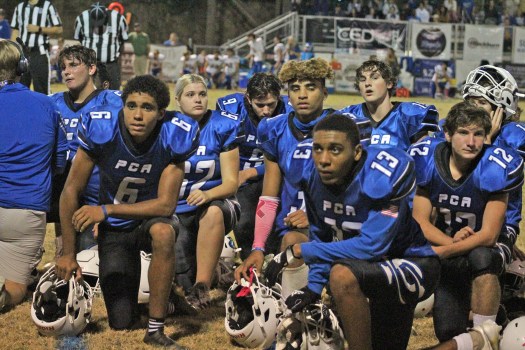 Down two points with 5 1/2 minutes left, and with 60 yards of football field in front of them, Porter’s Chapel Academy faced a ride or die drive to save its season.

The Eagles rode — all the way down the field, into the end zone, and into the second round of the MAIS Class 2A playoffs.

Ty Mack capped a 10-play, 61-yard drive with a 3-yard touchdown run with 1:03 remaining to lift Porter’s Chapel to a 36-30 victory over Ben’s Ford Christian School on Friday night.

The victory was the first in the postseason for PCA (5-5) since 2008. Their next assignment is a road trip to Tunica Academy (10-0), the top seed in the Class 2A bracket, next Friday.

“It’s what we wanted to do. It was the goal at the beginning of the year, was to get in and win the first one and then keep going,” PCA coach Blake Purvis said. “We’ve accomplished what we wanted to, to start. Now we just have to come back and gear up for the best team in the state.”

The game was back-and-forth the whole way, but PCA scored twice in the fourth quarter to erase an eight-point deficit. Ben’s Ford (4-6) had taken a 30-22 lead with a 20-yard touchdown run by Jonah Holston and a 2-yard TD by Nate Descant, with a successful onside kick in between.

PCA answered with a scoring drive of its own, capped by a 4-yard run by Jase Jung with 7:38 left in the game. Quarterback John Wyatt Massey was stopped on the two-point conversion, however, to leave the score at 30-28.

“It was nerve-wracking. When they scored on the last drive I was like, ‘We might actually lose this. And then we got a turnover and got the momentum back,” said Jung, who ran for 105 yards and two touchdowns, threw a touchdown pass, and had eight tackles and two interceptions on defense.

PCA got the defensive stop it needed on Ben’s Ford’s next possession, and the ball back at its own 39 with 5:36 to go. It was the perfect set-up for the kind of drive that will live forever.

“I told them before the drive started that we don’t have to have home run plays right here. We’ve got to pick up yards a clip at a time, get the clock rolling and not leave them much,” Purvis said.

Behind the running of Jung and Mack, the Eagles marched down the field until they faced fourth-and-4 at the Ben’s Ford 34 and had a prayer answered.

Massey dropped back to pass and was flushed out of the pocket to his right. He threw what appeared to be a blind pass downfield, and Thomas Azlin was in the right place at the right time to catch it at the 14-yard line.

Jung converted another third down a few plays later to give PCA first-and-goal at the 3-yard line, and then Mack finished it with a tough run up the middle for the lead. Mack also ran in the two-point conversion to make it 36-30 with 1:03 to go.

Mack finished with 98 rushing yards and the one TD on 17 attempts. He carried it six times for 43 yards on the game-winning drive.

PCA kicker Daniel Llopis then boomed the kickoff into the end zone for a crucial touchback. Ben’s Ford started at its own 20-yard line with only one timeout, and only made it to the 40 as time expired.

“What the kids did … they kept their head. They did what they were capable of doing. They worried about themselves, what they could control, and they never quit,” Purvis said. “This group right here, if that’s what they do, if they never quit, they keep playing and picking each other up, they’re never out of the game. When it comes down to it, we made the plays down the stretch defensively and then the offense did their job.”