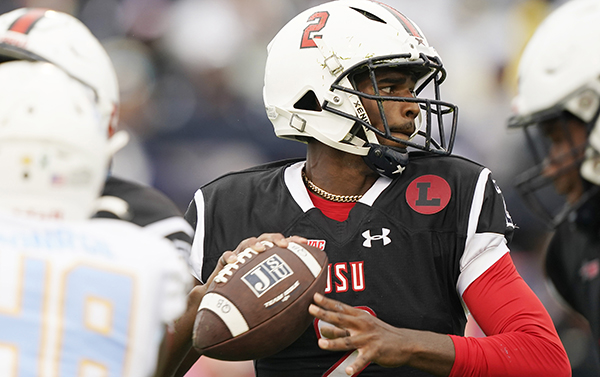 Patrick Shegog threw a touchdown pass and ran for another score in the last 16 minutes of the game as Delta State used a late surge to beat Mississippi College 52-38.

After Fagan Cole’s 51-yard TD run put Mississippi College ahead with 2:16 to go in the third, the Statesmen responded immediately. Shegog’s 27-yard touchdown pass to Jaylen Green with 31 seconds left capped a quick five-play scoring drive and tied it at 38.

Delta State then dominated the fourth quarter. Kelvin Smith scored on a 5-yard run with 11:02 left to put the Statesmen ahead for good, and Shegog’s 37-yard TD run with 2:02 remaining iced it.

Mississippi College had 329 rushing yards of its own. John Henry White finished with 113 and a touchdown on 26 carries, Marcus Williams had 94 yards and one TD, and Fagan had 93 yards and two TDs.

Washington, Floyd Chalk IV and Chance Williams were part of a ground attack in which each reached the end zone. Quarterback Julian Calvez also ran one in, but the Tigers only had 114 rushing yards as a team.

Stewart, a former Port Gibson High School standout, had five tackles along with his interception.
Tre Lawrence threw a 4-yard score to Tavarious Griffin with 19 seconds left in the third quarter for Alcorn State’s lone score.

The win ended a five-game losing streak for Grambling (2-6, 1-4 Southwestern Athletic Conference). The skid was the Tigers’ longest since dropping eight straight in their 1-11 campaign in 2013.

Alcorn State (3-5, 2-3) has dropped three consecutive following a three-game win streak. It’s the first time Alcorn has lost three in a row since ending the 2017 season with back-to-back losses and then dropping the 2018 season opener.

The son of “Prime Time” Deion Sanders, now known as Coach Prime of Jackson State and the reason ESPN’s “College GameDay” show was in town, Shedeur Sanders ran for two scores and threw for another to lead the Tigers to a weather-delayed win.

After a scoreless first quarter, Shedeur Sanders took control in the second quarter with three scores for the Tigers (8-0, 5-0 SWAC).

He connected with Sy’veon Wilkerson for a 3-yard touchdown to cap an 18-play, 80-yard drive. Then Sanders ran the final 42 yards of a quick three-play, 71-yard drive, and three seconds before halftime he scored on a 12-yard burst and added a two-point conversion pass.

Wilkerson scored on a 26-yard run for the only score in the third quarter. The game was delayed by more than an hour because of weather.

It’s only the fourth time since 2005 that “College GameDay” featured an HBCU matchup.

Berry ran for 366 yards as a team, while holding Millsaps to 152 yards of total offense.
Millsaps lost its third game in a row, and has been outscored 115-7 during the losing streak.

Belhaven 70, LaGrange 16
Tim Johnson threw three touchdown passes, and ran for 82 yards and another TD as Belhaven tied a single-game school record for points in its rout of LaGrange College on Friday.

Kolbe Blunt ran for 138 yards and two touchdowns, and Devin Daniels had 108 yards and two TDs for the Blazers (7-1, 5-1 USA South). Daniels also caught a 29-yard touchdown pass in the second quarter, when the Blazers scored 35 points to a take a 49-3 lead into halftime.

Belhaven amassed 449 rushing yards and averaged 9.2 yards per carry while winning its fifth game in a row.