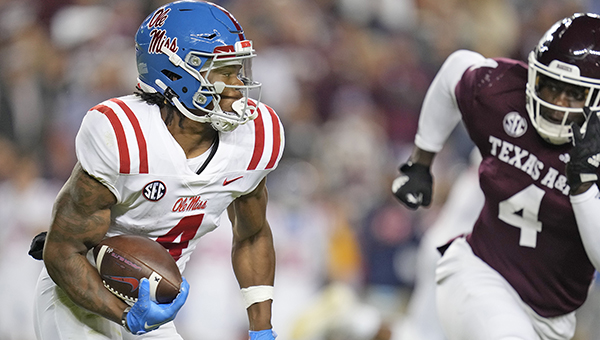 Ole Miss running back Quinshon Judkins (4) looks to turn the corner against Texas A&M defensive lineman Shemar Stewart (4) during the first half of Saturday's game. Judkins rushed for 205 yards and a touchdown as the Rebels won 31-28. (AP Photo/Sam Craft)

Judkins had a 1-yard touchdown run with 7:18 remaining, helping Ole Miss rebound from its first loss of the season. He is up to 1,036 yards rushing on the season.

Zach Evans, who missed last week’s 45-20 loss to LSU with a leg injury, returned against the Aggies and rushed for 75 yards. Jonathan Mingo had four catches for 89 yards and a touchdown for the Rebels (8-1, 4-1 Southeastern Conference).

Ole Miss rushed for 391 yards, including 134 in the first quarter, and finished with 530 total yards.

Connor Weigman was 28-of-44 for 338 yards and four touchdowns for Texas A&M (3-5, 1-4). The Aggies lost their fourth straight game for the school’s longest slide since losing four straight at the end of the 2005 season.

Trailing 14-7 in the first quarter, the Rebels reeled off the next 17 points. Ole Miss had a field goal before halftime, and Dart connected on touchdown passes to Casey Kelly and Mingo to take a 24-14 lead with a minute left in the third.

Noah Thomas scored on a 2-yard pass from Weigman, and Judkins answered with his 1-yard TD run to put Ole Miss ahead 31-21 with 7:18 left.

Texas A&M cut the lead to three on a 7-yard touchdown pass from Weigman to Achane with 1:25 remaining. The Rebels then went three-and-out, but the Aggies turned the ball over on downs deep in their own territory to end it.