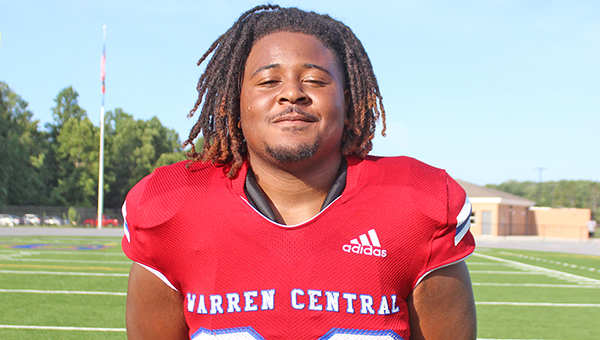 Warren Central linebacker Rashad Clark had a key interception late in the fourth quarter of the Vikings' 31-21 win over Petal on Friday.

PETAL — Warren Central has had a lot of gritty wins this season. The latest one meant a little more, though.

Rashad Clark had a key interception late in the fourth quarter, and Trey Hall broke a game-clinching 24-yard touchdown run with 18 seconds to go as Warren Central beat Petal 31-21 on Friday to clinch a berth in the MHSAA Class 6A playoffs.

It’s the 11th consecutive season that Warren Central (8-1, 5-1 MHSAA Region 3-6A) has earned a spot in the postseason.

Warren Central finishes the regular season at home vs. Meridian next Thursday.

“That’s the ultimate goal. We’re just very proud of where we’re sitting and what we’ve accomplished, because it’s not easy — especially in 6A,” WC coach Josh Morgan said. “Another year in the playoffs speaks highly of our program and these players. It’s a really good year, and it’s what they’ve been able to do consistently.”

It was the fifth time in 10 games that Warren Central has had to play until the final minute to settle things. Petal quarterback Deljay Bailey threw one touchdown pass and ran for another, and his 16-yard TD to Ryan Poole with 4:32 left in the game brought the Panthers to within 24-21.

Petal (3-7, 0-6) got the ball back after a defensive stop, but Clark’s interception put it right back in Warren Central’s hands. The Vikings were trying to pick up a first down to ice the game deep in Petal territory when Hall broke off his 24-yard TD run.

“We were just trying to get a first down and Trey Hall broke it and took it to the house,” Morgan said. “It was a good win. We had to fight for four quarters. I’m very proud of them.”

Warren Central’s 10-point lead in the fourth quarter was the only time either team gained any separation.
Darius Carter gave the Vikings an early lead with a 33-yard touchdown run, but Petal scored the next two TDs on a 3-yard run by Bailey and a 13-yard run by Poole.

Warren Central tied it with a 36-yard TD pass from Jack Wright to Zack Evans with 49 seconds left in the first half, then surged ahead in the second half Mark Gray scored on a 5-yard run and Jonah Artman kicked a 26-yard field goal with 6:29 to go in the fourth quarter to make it 24-14.