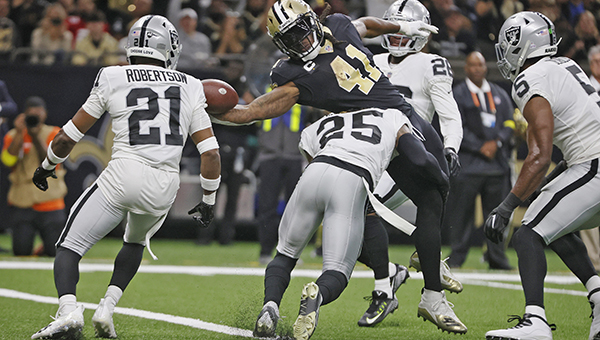 New Orleans Saints running back Alvin Kamara (41) stretches across the goal line for a touchdown against the Las Vegas Raiders on Sunday. Kamara had 158 total yards and scored three touchdowns to lead the Saints to a 24-0 victory. (AP Photo/Butch Dill)

NEW ORLEANS (AP) — Saints running back Alvin Kamara has his teammates’ attention as he explores the bounds of his leadership in his first season wearing a captain’s “C” on his jersey.

The sixth-year running back demanded better from everyone in a speech to the team following a mistake-filled Oct. 20 loss at Arizona and followed that up by saying publicly last week that New Orleans intended to “whoop” the Raiders for Saints coach Dennis Allen.

Kamara backed it up by scoring his first three touchdowns of the season, and New Orleans’ defense was dominant in a 24-0 victory over Las Vegas on Sunday.

“I stick to what I said,” Kamara said. “We was going to go out there and beat their (butt), and we did that.”

Kamara converted short receptions into touchdowns of 36 and 16 yards. He also rushed for a 3-yard score.

“We came in wanting to kind of just impose our will,” Kamara said. “I was talking about getting back to playing our style of football. Obviously, it looks like it’s me, but it’s a team thing. So, it’s refreshing to kind of get that.”

Andy Dalton justified the Saints’ decision to start him for a fifth straight game despite season-opening starter Jameis Winston having recovered enough from back and ankle injuries to be a full participant in practice this week.

Dalton was 22-of-30 passing for 229 yards and two TDs. His top receiver was Kamara, who had nine receptions for 96 yards to go with his 62 rushing yards.

“He did some pretty slick things to get open,” Raiders coach Josh McDaniels said of Kamara. “Clearly we didn’t do a good enough job with him or with tackling when he had the ball in space.”

Kamara has been having a productive season and had surpassed 100 yards from scrimmage in New Orleans’ previous three games. Oddly, that hadn’t translated into a single touchdown until he faced the Raiders, the franchise that gave Allen his first head coaching job in 2012 and fired him four games into his third season.

Allen grinned when asked if he had been aware of Kamara’s pledge to beat Las Vegas earlier in the week — the kind of comment that could enflame an opponent.

“I feel much better about it now,” Allen said.

The Raiders (2-5) didn’t move the ball across midfield until two minutes remained in the game.

“That’s pretty rare,” Saints safety Tyrann Mathieu said. “To kind of limit those guys and fluster them for pretty much 55 minutes of the game, hats off to our coaches for the scheme.”

Derek Carr was 15-of-26 for 101 yards with one interception, and was sacked three times before being replaced by Jarrett Stidham late in the fourth quarter.

The Raiders also were hurt by a failed fake punt in the second quarter, one play after Davante Adams’ end around on third-and-1 was stuffed by defensive end Marcus Davenport. That was compounded by a chop block penalty giving the Saints starting field possession on the Las Vegas 27. The Saints (3-5) converted that opportunity into a field goal that made it 10-0.

“Obviously that wasn’t good enough in any way, shape or form,” said McDaniels, who offered an apology to Raiders fans. “That’s my responsibility. So, we have to do much better in every phase of the game to compete with a team like that.”

The Saints defense had four sacks in all, two by second-year defensive end Payton Turner, who was playing for the first time in four weeks after recovering from a chest injury. Tackle David Onyemata had another, while end Cameron Jordan and tackle Kentavius Street shared one.

“We’re capable of playing the type of football that we played today and we hadn’t done that up to this point,” said Allen, who also oversees the defense. “It’s really just about our guys maximizing their potential and I thought they answered the bell today.”

This marks the first that the Saints have had shutouts in back-to-back seasons since 1991 and 1992. They shut out Tampa Bay last December.

The Saints came in with an NFL-worst turnover differential of minus-10 but did not turn the ball over this week. Mathieu intercepted Carr on a pass tipped by linebacker Pete Werner for the Saints’ second interception all season. Mathieu has both.

“By far, this was the most complete game that we’ve played,” said Dalton, who threw three interceptions — two returned for touchdowns — at Arizona. “It shows what we can do when we play the right way.”