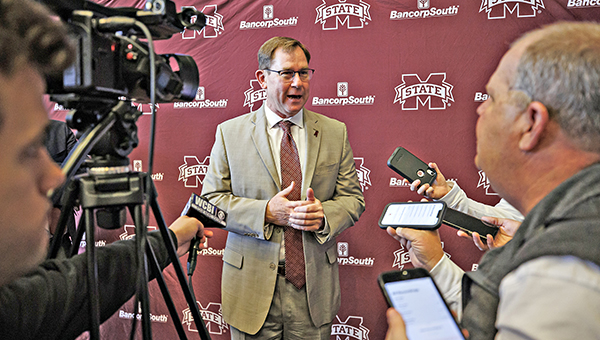 John Cohen speaks to the media at a news conference in March. Cohen, who had been Mississippi State's athletics director since 2016, announced Monday that he has resigned effective immediately amidst reports he will be hired for the same job at Auburn. (Austin Perryman/Mississippi State Athletics)

STARKVILLE — Mississippi State is searching for a new athletics director after John Cohen announced his resignation, the university announced Monday.

Reports surfaced over the weekend that Cohen has been in talks with Auburn to become its new athletics director, and that his hiring could be announced later Monday.

In a statement, Mississippi State president Mark Keenum said Cohen had notified the university that he is stepping down effective immediately.

“We thank John and Nelle for their long and dedicated service to MSU. In many ways, MSU is a victim of our own success in that several former MSU athletics directors have transitioned into similar roles at peer institutions in the Southeastern Conference,” Keenum said. “That fact speaks to the growing culture of success among our student-athletes and the commitment of our university, our alumni and friends and our fans to competing at the highest levels of collegiate athletics and doing so in the right way.”

Bracky Brett, Mississippi State’s Executive Senior Associate Athletics Director for Compliance, will step in as the interim athletics director while a search is conducted.

“Bracky is well-known and highly respected in the Southeastern Conference and across the NCAA and I know he will maintain stability and focus as we move forward with a search for a new athletics director,” Keenum said.

Although he hadn’t yet been introduced as Auburn’s new athletics director, Cohen’s impact on that school might already be felt. Around noon Monday, Auburn announced that it has fired football head coach Bryan Harsin after less than two seasons.

Harsin went 9-12 overall and 3-5 this year. Auburn has lost four straight games while struggling against Power Five opponents, including a 41-27 loss to Arkansas on Oct. 29. Auburn will owe Harsin 70 percent of his remaining contract — more than $15 million — and half of that must be paid within 30 days.