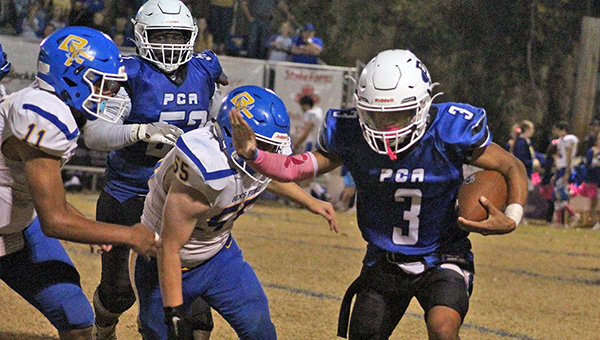 Porter's Chapel Academy running back Jase Jung (3) carries the football during an MAIS Class 2A playoff game vs. Ben's Ford on Friday. Jung ran for 105 yards and two touchdown, threw a touchdown pass, and had a team-high eight tackles and two interceptions on defense. (Ernest Bowker/The Vicksburg Post)

1
There are a few things Jase Jung says he definitely can’t do on the football field.

Other than playing offensive tackle, though, it seems like lately the Porter’s Chapel Academy sophomore is everywhere.

Jung has emerged as PCA’s lead running back down the stretch and posted back-to-back 100-yard games. He’s taken some snaps at quarterback and thrown a touchdown pass in the last two games. And, at defensive back, he has four interceptions in the last three games.

Jung’s valuable versatility has helped the Eagles (5-5) reach the second round of the playoffs for the first time since 2008. They beat Ben’s Ford 36-30 in the first round last Friday, and will travel to play top-seeded Tunica Academy (10-0) in the MAIS Class 2A bracket this week.

“He’s able to be moved around and handle all those different responsibilities,” PCA coach Blake Purvis said. “That’s what you want with a guy like that, that has the physical abilities to do that. You also want him to have the mental capacity to do that. He’s really handled it well coming down the stretch.”

Jung contributed much more on defense than offense in his first season and a half of varsity football. He had a team-high four interceptions in 2021, and snagged five more this year. Coming down the stretch in 2022, however, he’s also become an offensive force.

Jung had 121 total yards and scored two touchdowns in a district win over Prairie View on Sept. 30, then caught nine passes for 86 yards the following week against Prentiss Christian. The last two games, vs. Tallulah Academy and Ben’s Ford, he’s had 274 rushing yards and five TDs and thrown a touchdown pass in both games.

“We were without (running back Ty Mack) for a game, so that shifted that. He’s really our only other true running back,” Purvis said. “He is a good, solid football player. He has matured so much as this year has gone on, and he’s able to handle all those different roles.”

Both of Jung’s passing touchdowns were to John Wyatt Massey, who normally plays quarterback but moves to tight end when Jung takes snaps in the wildcat formation.

“Him being able to play quarterback and allow John Wyatt to play tight end … John Wyatt is one of the best blockers on our team,” Purvis said. “So the fact we can roll him down in a set and then we have that connection makes us hard to defend.”

In the playoff win over Ben’s Ford, Jung showed off his versatility. He had 19 carries for 105 yards and three touchdowns, threw a 14-yard TD pass to Massey, and led the defense with eight tackles and two interceptions.
Jung also played quarterback for large parts of two scoring drives in the fourth quarter when Massey briefly left the game with a minor injury.

“They’ve been switching me around to every position, trying to get me the ball. It works a little bit. I love my coach for it,” Jung said. It feels like I’m doing something for the team and it feels really good.”

2
Alcorn State lost 35-6 to Grambling on Saturday, and continued a frustrating trend of slow starts.

The Braves fumbled on the opening kickoff and then gave up a touchdown on Grambling’s ensuing possession, marking the third game in a row in which they have given up the first score.

Grambling went on to lead 28-0 at halftime. It was the fourth time in five games that Alcorn has been behind at the half. It was also the first time Alcorn failed to score in the first half against a SWAC opponent since the final game of the 2011 season vs. Jackson State.

3
Warren Central beat Petal 31-21 to clinch its 11th consecutive playoff berth. That is the second-longest active streak among the teams in MHSAA Class 6A, trailing only South Panola.

South Panola has already locked up its spot in the 2022 postseason to extend its streak to 22 years. Madison Central has also extended the third-longest streak in 6A, to eight years.

“That’s the ultimate goal. We’re just very proud of where we’re sitting and that we’ve accomplished that, because it’s not easy — especially in 6A,” Warren Central coach Josh Morgan said. “Another year speaks highly of our program and our players and coaches.”

The longest active postseason streak in any classification in the MHSAA belongs to Taylorsville, which will make its 33rd consecutive appearance when the Class 1A playoffs start next week. Taylorsville’s first 31 appearances during the streak were made while playing in Class 2A.

The longest streak among current Class 2A teams is Calhoun City, at 24. The Class 3A leader is Hazlehurst at 22 years in a row, and Louisville is setting the pace in Class 4A at 17.

In Class 5A, the longest active streak belongs to West Point which has clinched its 22nd straight trip to the playoffs. Picayune is heading there for the 18th year in a row.

4
The Dallas Cowboys and Chicago Bears brought a unique look to their game on Sunday.

The Cowboys, who have worn their white jerseys for nearly every home game since the 1960s, instead opted for their blue road jersey. The Bears, meanwhile, broke out their orange alternate jersey and new orange helmets.

Excluding the special Color Rush games from 2015-18, this was the first time since 2017 that the NFL has had a “color vs. color” game in which neither team wore a white jersey.

The Cowboys and Bears also played a color vs. color game on Thanksgiving 2004. The Bears wore their alternate orange jerseys, and the Cowboys wore a navy blue throwback. The Cowboys did not wear their regular navy blue jersey at home until 2013.

The final score — Cowboys 49, Bears 29 — was also a bit of an oddity. It was only the second game in NFL history to end with that score, joining a Denver Broncos’ win over the Kansas City Chiefs in 2010.