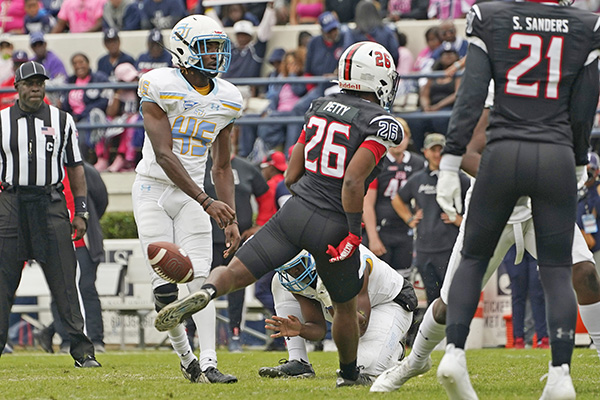 A weekly roundup of performances by college football players from Vicksburg-area high schools:

• Southern University kicker/punter Joshua Griffin (Warren Central) averaged 36.5 yards on eight punts in a 35-0 loss to Jackson State. He had one punt downed inside the 20-yard line. Griffin also missed one field goal and had another block, made one solo tackle, and kicked off once.

• Grambling defensive back Myron Stewart (Port Gibson) had five total tackles, one-half tackle for loss, and returned an interception 68 yards for a touchdown in a 35-6 rout of Alcorn State.

• Alabama A&M defensive back Aadreekis Conner (Port Gibson) had one-half tackle for loss in a 24-17 loss to Alabama State.

• Reinhardt University defensive lineman Vertez Shorter (Warren Central) had six total tackles, including one tackle for loss, in a 43-14 win against St. Andrew’s.