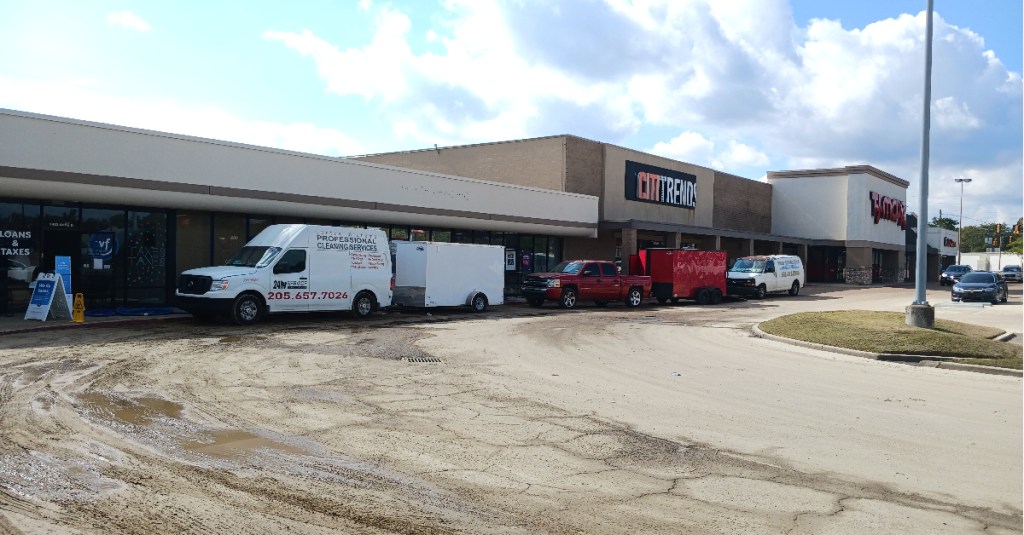 Trucks for cleanup companies line up in front of businesses at Pemberton Square Shopping Center as the recovery from Saturday's flood gets underway. (Photo by John Surratt | The Vicksburg Post)

But city of Vicksburg officials said the flooding was not the result of problems with the system, which is still under construction. Had the project been completed, Mayor George Flaggs Jr. said, “This wouldn’t have happened.”

According to the National Weather Service Office in Jackson, the frontal system that passed through Warren County at about 1 p.m. Saturday dropped 1.06 inches of rain in Vicksburg in about 30 minutes.

The heavy rain overwhelmed the drainage system, causing it to back up and flood, forcing some businesses to close, flooding some cars and leaving standing water in some businesses.

“We had a pretty good rain quick and that’s a lot of drainage area that goes into it (the system),” Van Norman said, adding the system drains most of the Pemberton Square area. “Everything from where TJ Maxx is north and then a lot of that (property) south. That’s a lot of acreage and it’s all flat and it’s all developed and when it rains on it, (water) gets there quick.”

He said city pumps were taken to the area to help ease the water levels.

The Board of Mayor and Aldermen in August declared an emergency to repair the almost 40-year-old drainage problem that causes flooding on Pemberton Square Boulevard going back to the 1980s when the area was being developed during the construction of the then-Pemberton Square Mall.

The declaration of an emergency allowed the city to directly seek a contractor to do the work in order to avoid the delay caused by the competitive bidding process. The board also signed an agreement with the engineering firm hired by Merit Health for its new clinic on Pemberton Square Boulevard to perform the engineering for the drainage improvements.

The problem on Pemberton involves two large drainage pipes connected to a smaller pipe, making it difficult to remove water from the area. Instead, the water backs up, causing a flood and blocking or slowing traffic from the Pemberton Plaza Shopping Center entrance near Goldie’s Express almost to Kroger. The project will replace the smaller pipe.

On Aug. 12, the board declared an emergency to fix the problem, and on Sept. 2 approved a resolution to apply for a Mississippi Department of Environmental Quality Mississippi Municipality and County Water Infrastructure Grant to assist with the repairs.