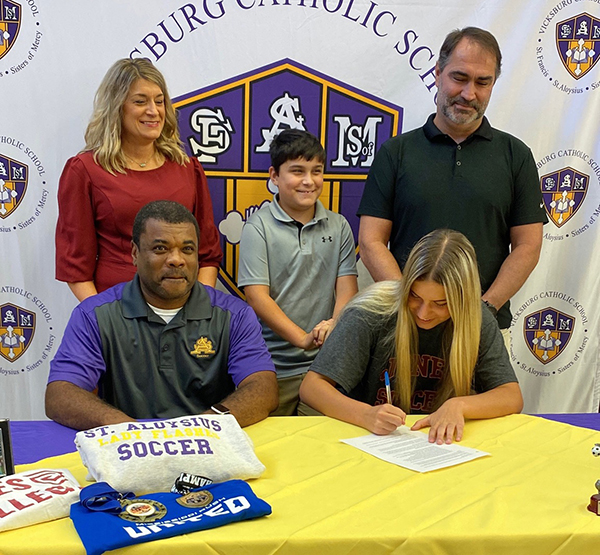 As the recruiting process played out, Bree Butler looked at her options and studied them carefully.

There were several junior college programs on the list, as well as a couple of four-year schools. She decided that the latter might be the straightest path to her goals, but it might not be the best one.

Butler, a St. Aloysius soccer standout, passed on the four-year offers to sign with national junior college power Jones College. She celebrated the decision with a ceremony Wednesday morning at St. Al.

She picked Jones over offers from East Central, Meridian and Copiah-Lincoln community colleges, as well as four-year schools Belhaven and Louisiana Tech.

“I went on a visit to Louisiana Tech and we were talking there, and I thought juco would be my best route to get myself better as a player and then go on from there,” Butler said. “Coming straight from high school to a university, I didn’t want to jump into anything that quickly. I can build myself as a player.”

Butler scored 16 goals for St. Al over the past three seasons, but said she expects to play defense at Jones. She also expects Jones, a perennial power in the National Junior College Athletic Association, to help improve her game and make her more ready to play at a four-year program.

Jones currently has an 11-1-2 record and is ranked No. 4 in NJCAA Division II. It won the MACCC state championship in 2021, and reached the NJCAA national semifinals in 2020.

Another St. Al standout, Elizabeth Theriot, is a freshman defender on Jones’ team this seaosn.

“They’ve always been one of the top schools for athletics and it’s more likely for them to get me to the next level after my two years,” Butler said.

Signing with Jones is the high point — so far — of an outstanding athletic career for Butler. She’s played soccer since she was 3 years old, and is also an accomplished swimmer. She finished third in the 100 yard backstroke at the MAIS Overall Swim Meet in September.

Seeing the hard work pay off, she said, was “amazing.”

“It’s more of like a relief knowing I finally made it here and I’m actually doing what I said I was going to do, and just to know that all my hard work paid off. It’s amazing,” she said. “I want to thank all my coaches, and for sure my parents. They spent so much money on me for showcases and travel, and teams in general.”