Vicksburg tunes up for playoffs, eyes program milestones vs. Holmes 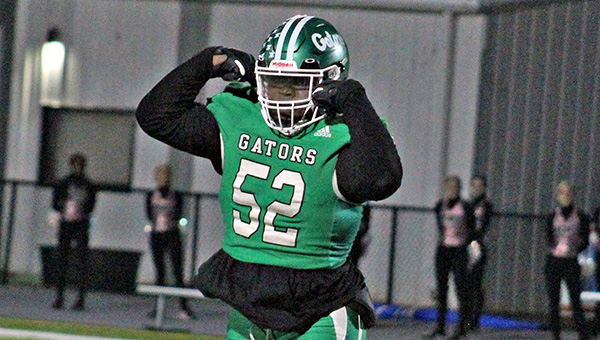 Over the years, Vicksburg High has played its share of meaningless season finales. Few were like this.

The Gators wrapped up the MHSAA Region 2-5A championship two weeks ago and will host a playoff game next week. Their opponent, Holmes County Central, is locked in as the region’s No. 4 seed.

It’s an odd scenario that makes Thursday’s game at Memorial Stadium a glorified exhibition and tune-up game, rather than a high-stakes contest for playoff positioning.

Coming off an open date, it’s also a chance for the Gators to get their feet back under them before beginning what they hope will be a deep run in the postseason.

“I’m looking at it as though this is going to get our wheels back rolling for the playoffs,” Vicksburg coach Todd McDaniel said. “You want to get out there and play as hard as you possibly can, but you don’t want to get anybody injured either. We’re going to definitely go out Thursday to win. I’m not resting 15-, 16-, 17-year-olds. They’re full of energy.”

First is some recent history. Holmes has won the last two meetings, including a 14-12 decision in 2021 in which Vicksburg had a number of questionable penalties go against it. One of those penalties erased a touchdown, and another negated a long interception return into Holmes territory.

This will be the first time they’ve played at Memorial Stadium since 2017. Their meetings were at Holmes in 2018, 2020 and 2021. The 2019 game was moved to Warren Central’s Viking Stadium when a transformer caught fire and knocked out the lights just before kickoff.

“They’ve struggled a little bit lately, but they still have a really good team,” McDaniel said. “They may have a quarterback situation where the starter was hurt for a few games. We just need to go out there and follow our rules and execute.”

Vicksburg has an opportunity to add a couple of notable milestones to an already impressive list of accomplishments in 2022.

Having already won its first region championship since 1990, Vicksburg can finish undefeated in region play for only the third time in the MHSAA’s playoff era. The 1984 and 1990 teams both went 3-0. This would be the first time the Gators went 7-0 or 8-0.

According to the Alabama High School Football Historical Society, which has compiled a comprehensive history of high school football in Mississippi, Alabama and Tennessee, only 16 other Mississippi high schools have won 600 games or more.

“That would be an awesome accomplishment for the Gator family, for us to go out there and get 600 wins. It just pays tribute to the guys and coaches that were here before us, about how good they were in the past,” McDaniel said. “We always talk about the history. It’s just a fun fact to know, and also to be able to say we brought 600 in. The kids can talk about that 30 years from now.”