With one game left, Vikings can still finish first, second or third in Region 3-6A 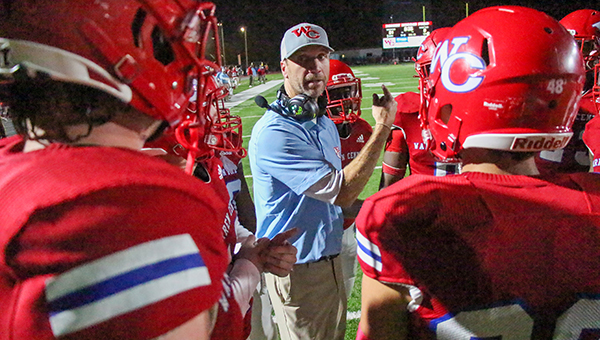 Josh Morgan spent a minute or so going through several different playoff scenarios for his Warren Central Vikings heading into their regular-season finale.

He soon gave up and came back to the two words that have become the de facto team motto for the 2022 season.

Simple as it sounds, beating Meridian (4-4, 3-3 MHSAA Region 3-6A) actually is the linchpin to all of the positive outcomes for Warren Central (8-1, 5-1) heading into Thursday’s game.

The Vikings can finish either first, second or third in Region 3-6A depending on the outcomes around the league this week. Finishing first or second — and thus earning the right to host a playoff game next week — can’t happen unless they beat Meridian.

“Whatever happens, we really can’t control that. We know if we’re fortunate enough to win this game we’ll have had just a tremendous season. That’s going to be our focus, and whatever draw we get we’re going to be happy to go or stay or whatever it is,” Morgan said. “We just want to win, and get better, and finish our district schedule the right way. We’ll figure it all out when it gets done. There are a bunch of possibilities but there’s nothing we can do until after the game’s over with anyway, so we’ll worry about when it gets there.”

To win their first region championship since 2004, Warren Central needs to beat Meridian, as well as have Pearl upset Brandon. Brandon will win the region title if it beats Pearl, regardless of any other results.

Brandon (5-1 in region play), Warren Central, Oak Grove (5-1) and Northwest Rankin (4-2) have all clinched playoff berths. Only the order is in play on Thursday night. However it shakes out, Morgan said it’s fun to have every game this week be a meaningful one.

“It’s absolutely fun to be in it, because it’s no fun to be out of it. I can tell you that for a fact,” he said. “It’s a credit to our team for being one of the top-tier teams in our district. To be able to speak on the playoffs for sure is fun. They’ve earned it and deserve it.”

Meridian has been eliminated from the Region 3-6A playoff race, but won’t be an easy mark for the Vikings.

Running back Daniel Hill has scored 15 touchdowns this season and has scholarship offers from nearly a dozen Division I colleges including Alabama. Defensive back Quindarrius Jones was selected to play in the Mississippi-Alabama All-Star Game, while defensive lineman Tylan Cole and offensive lineman Roscoe Tucker are headed to the Bernard Blackwell Mississippi All-Star Game.

“Meridian is coming in here with two or three big-time recruits and players, and just a really good football team. They’re going to be hard to beat,” Morgan said. “I think they’ve got one of the best running backs in the country (Daniel Hill). He’s one of those special players. They’re big up front on both sides of the football. It’s going to be a hard out for us.”

Winning would achieve another notable milestone for Warren Central. It has not finished a season with two or fewer losses since the 2004 squad went 10-2. A victory Thursday would ensure that streak is broken.

Warren Central extended its streak of consecutive playoff appearances to 11 — the second-longest active streak in MHSAA Class 6A — by beating Petal last week.

While proud of what this team has accomplished so far, Morgan said the Vikings will wait to reflect on just how good it’s been until all of the history is written a few weeks from now.

“We hadn’t had a chance to reflect on it, and it’s not something we’re going to do right now. But it’s going to be one of those where we look back on it and are very proud of it,” Morgan said. “We still have everything in front of us and still so much more that we want to accomplish. I feel like we have the group to do it with. We’ve done good. We just have to keep our head down and continue to do the things that got us here.”