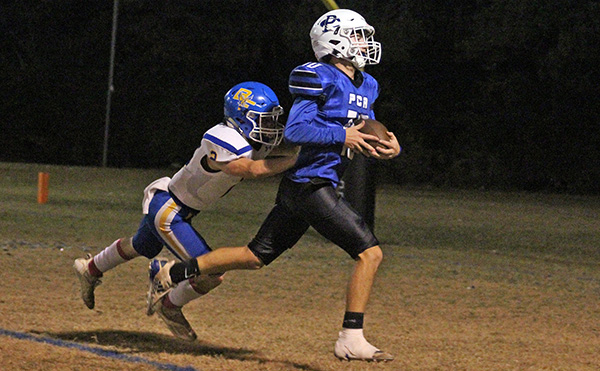 Porter's Chapel Academy's John Wyatt Massey (10) catches a touchdown pass in front of Ben's Ford's Dashell Houston in the first half of last week's MAIS Class 2A playoff game. PCA will play at top-seeded Tunica Academy in the second round on Friday at 7 p.m. (Ernest Bowker/The Vicksburg Post)

For the first time in 10 years, Porter’s Chapel Academy will play a football game in November. The challenge now is earning the right to play another.

Porter’s Chapel (5-5) will go on the road Friday to play Tunica Academy (10-0) in the second round of the MAIS Class 2A playoffs. Tunica is the top seed in the bracket and has not scored less than 38 points in any game this season.

PCA coach Blake Purvis, however, isn’t bowing down just because Tunica has an impressive resume.

“We’ve got to execute. If we do what we’ve tried to do all year, which is control the things we can and focus on ourselves, we’ve got the talent and ability to beat anybody,” Purvis said. “But we’ve got to get off to a good start. We can’t turn the ball over. And we’ve got to keep their offense off the field.”

Several of those items are things PCA has struggled to do all year. It has not scored first in a game since a Week 3 win vs. Discovery Christian, and is minus-4 in turnover differential for the season.

The Eagles have been able to overcome those obstacles to win five games, including last week’s 36-30 playoff victory over Ben’s Ford. PCA gave up a touchdown on the first series of the game, and trailed 30-22 at the start of the fourth quarter.

“We didn’t make the mental mistakes that allowed things to snowball on us,” Purvis said of last week’s victory. “If we handled the second half like we had the last three weeks (all losses), we probably don’t win that game.”

Another key to coming back down Highway 61 victorious this Friday will be running the football. Being able to move the chains and bleed the clock can keep Tunica’s explosive offense off the field and hopefully keep the Eagles in it.

“In any football game if you can run the ball you’ve got a chance,” Purvis said. “If we can get those guys rolling, our chances of overall team success are a lot higher. If you’re running the football you’re winning the line of scrimmage, and if you’re doing that then you have a chance.”

Beyond the X’s and O’s, Purvis is hoping the Eagles look to the recent past for inspiration.

PCA’s baseball team finished third in its district, then won two series to reach the third round of the Class 3A playoffs. The boys’ basketball team reached the Class 3A semifinals and MAIS Overall Tournament.

Like the football team, which had last won a playoff game in 2008, those teams ended long droughts of postseason success. A number of players were also members of all three teams.

“We said going into the playoffs that everybody is 0-0 now and once you’re in you’ve got to take it week by week and keep winning,” Purvis said. “I hope a great portion of our team was on that baseball team last year. They got in as a 3-seed and went on a run. Hopefully that mentality carries over.”