Vicksburg, Warren Central back in same region under MHSAA realignment plan for 2023-25 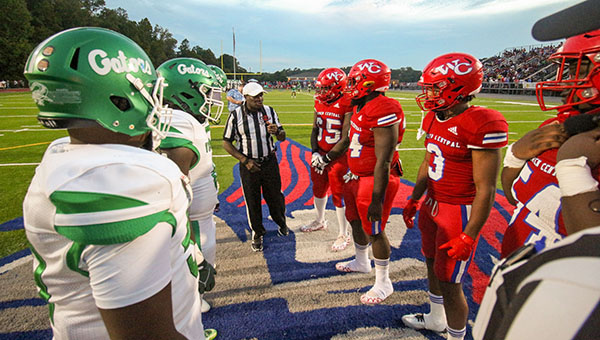 Vicksburg High and Warren Central football players meet for the coin toss before the start of their game in September. Warren Central and Vicksburg will once again be region opponents under the MHSAA's realignment plan for 2023-25. (Walter Frazier/For The Vicksburg Post)

For the first time in a decade, the Vicksburg-Warren Central rivalry will be for more than just bragging rights.

Warren Central and Vicksburg will both be in Class 6A for the 2023-25 reclassification cycle, according to enrollment numbers released Thursday by the Mississippi High School Activities Association.

Although the two Warren County schools have played each other in every sport, this will be the first time since the 2012-13 school year that they are in the same classification and region.

Vicksburg and Warren Central will be in Region 2-6A, along with Callaway, Columbus, Neshoba Central and Ridgeland.

“It always matters, but now it’s really going to matter,” Vicksburg High boys basketball coach Kelvin Carter said. “It’s going to add a lot of juice because now it ain’t about getting the key to the city. You want to win that game because it’s district. It adds a little flavor to it.”

The MHSAA expanded from six classes to seven starting with the 2023-24 school year. The 24 largest schools, based on enrollment from ninth through 11th grades, were classified as 7A. The next 24 comprise Class 6A. There are 40 schools in Classes 5A, 4A and 3A; and 38 each in Classes 2A and 1A.

In the larger classifications, regions are split into pods of six teams apiece.

Warren Central is the fifth-largest Class 6A school, with 889 students in grades 9-11, and Vicksburg is the smallest with 699.

The smallest Class 7A school is Lewisburg, with 960 students. Greenville, with 690 students, is the largest in Class 5A.

This will mark the first time since the MHSAA’s basic alignment structure began in 1984 that Warren Central is not in the state’s largest classification. Previously, the 32 largest schools had comprised Class 6A — and Class 5A before a sixth classification was added in 2009 — and Warren Central had consistently been ranked between 20 and 30 for the past decade.

Other than a brief drop to Class 4A in 2007-08, Vicksburg was in the largest classification from 1987 until 2013, when it moved into Class 5A, the second-largest. Its enrollment has decreased a bit over the past decade, however, while new schools around the state have opened with large enrollments and bumped others down a few slots.

DeSoto County, for example, has four high schools in the new Class 7A and two more among the top 10 enrollment numbers of Class 6A.

The new Region 2-6A will include several new opponents for Warren Central — it has never played Ridgeland or Neshoba Central in football, and hasn’t played Columbus since 2013 or Callaway since 2016 — but will be very familiar to Vicksburg.

Callaway, Ridgeland and Neshoba Central are all current football region rivals for Vicksburg. Callaway is a current region opponent for basketball, and Ridgeland has often been one over the past 10 years.

The region might also be one of the toughest in the state for basketball. Neshoba Central and Vicksburg are among the favorites for this year’s Class 5A girls championship. Neshoba Central won the Clas 5A title last season and Columbus won it in 2020.

On the boys’ side, Callaway is a perennial championship contender who won its last title in Class 5A in 2020, Columbus won the Class 6A title in 2016 and 2018, and Vicksburg has been a playoff regular.

“We’ve always been part of the toughest classification since I’ve been here, whether we were 4A, 5A or 6A,” Carter said. “I’m quite sure it’s still going to be competitive.”