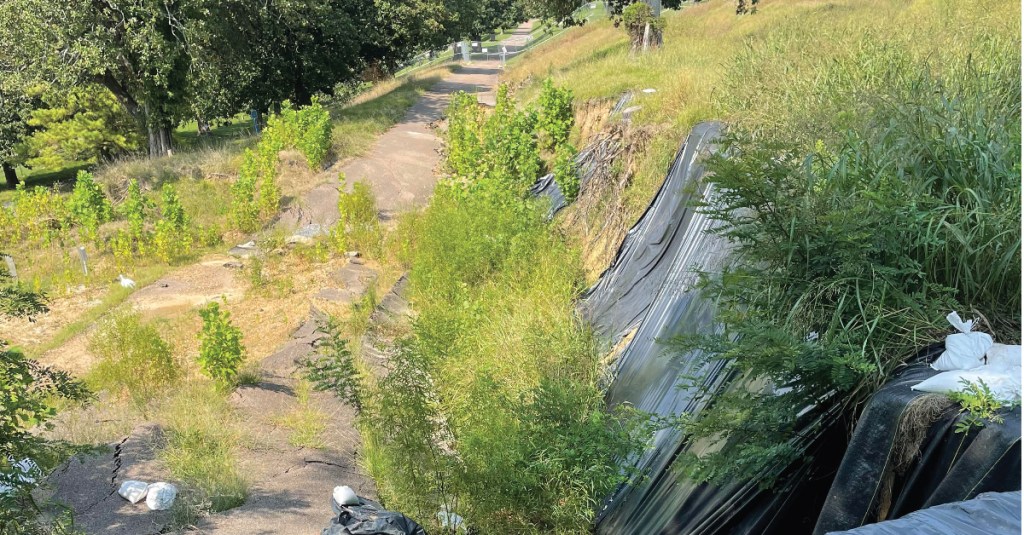 Sections of damaged pavement are mixed with brush at the site of a road collapse at the Vicksburg National Military Park's national cemetery. Park officials hope to begin the process of repairing the road and saving the remains of graves at the site sometime after the first of the year. (File Photo courtesy of the Vicksburg National Military Park)

The American Battlefield Trust is conducting a nationwide campaign to convince Congress to approve measures that will reopen now-closed sections of the Vicksburg National Military Park.

“We’re starting a letter-writing campaign calling for studies and funding to repair those damaged areas in the park,” said Mary Koik, director of communications for the American Battlefield Trust. The non-profit organization is dedicated to preserving America’s battlegrounds from the Revolution, War of 1812 and the Civil War and educating the public about what happened and why it matters.

“We want to call attention to the damage that has occurred in the park from rain and erosion,” she said. “The soil (in the area) is the problem.”

Erosion caused by heavy rains in January and April of 2020 resulted in several serious erosion problems in the park, forcing park officials to close sections of roads on the park’s tour route.

Presently, according to the Vicksburg National Military Park website, Grant Avenue beyond the African American Monument including Grant Circle is closed to vehicles and pedestrians.

Union Avenue from Grant Avenue to the USS Cairo Museum is closed to vehicles and pedestrians.

“The closure at Grant Circle and North Union Avenue and the Cemetery, those are related to storms that occurred in early 2020,” said Brendan Wilson, the park’s Chief of Interpretation, Education and Partnerships.

The damage at the National Cemetery is the most visible of the park damage. Heavy rains in January and February saturated the grounds, causing a massive slide in the cemetery that took out a section of the cemetery’s road. While some gravesites were affected, no graves were exposed by the slide.

Established in 1866, the National Cemetery covers 116 acres and holds the remains of 18,000 people. More than 17,000 Union troops are buried at the cemetery — more than in any other national cemetery — including 6,500 United States Colored Troops.

The National Park Service is also conducting a park-wide study looking at not just the park’s damaged roads but its entire road system. The park also handled several projects during the summer to take care of some other minor road problems.

“We’re proud to partner with American Battlefield Trust and continue to raise awareness in (Washington) D.C. and among the National Park Service that a priority remains for these repairs,” said Bess Averett, executive director of the Friends of the Vicksburg National Park and Campaign. “We believe work will begin in the cemetery in 2023 and we’re proud that we’ve gotten that project.”